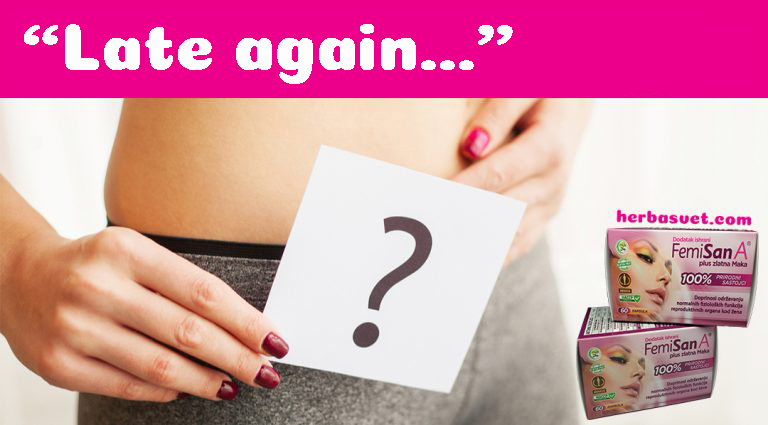 From puberty to menopause, menstruation is a faithful companion of every woman. Although it is not very pleasant by nature, what is much more unpleasant is when we get irregular periods. It is always better if we can be sure of the exact day when it will start, not only to make it easier to plan our leisure activities, but also because its frequent absence usually indicates the presence of a disorder. In order to follow the cycle, we need to keep records. The simplest thing is to have a small calendar to hand in which we can note when a menstruation starts and calculate how many days remain before the next one.

HOW DO HORMONES CHANGE DURING A CYCLE?

Irregular periods are the clearest indicator that there is no coordinated change of hormones in our body during the menstrual cycle. When everything is as it should be, from about the seventh day of the cycle, the level of oestrogen rises sharply, and that is the period when we feel the best, brightest and strongest. A couple of days later the luteinising hormone jumps, which ensures healthy ovulation. Ovulation, the maturation of an egg and its passage through the fallopian tube, represents the very middle of the cycle, which, in ideal conditions, occurs around the fourteenth day; the follicle-stimulating hormone has already taken care of the follicle growth and the quantity and quality of ova in the ovaries. Immediately afterwards, the luteinising hormone drops sharply, and oestrogen is already at its lower limit. Now there is progesterone, which prepares the body for pregnancy if fertilisation has taken place. If that is not the case, it stimulates the peeling of the endometrium, the inner lining of the uterus, which previously thickened thanks to estradiol, and then is expelled from the body during menstruation at the very end of the menstrual cycle. And when one round is over, a new one begins… 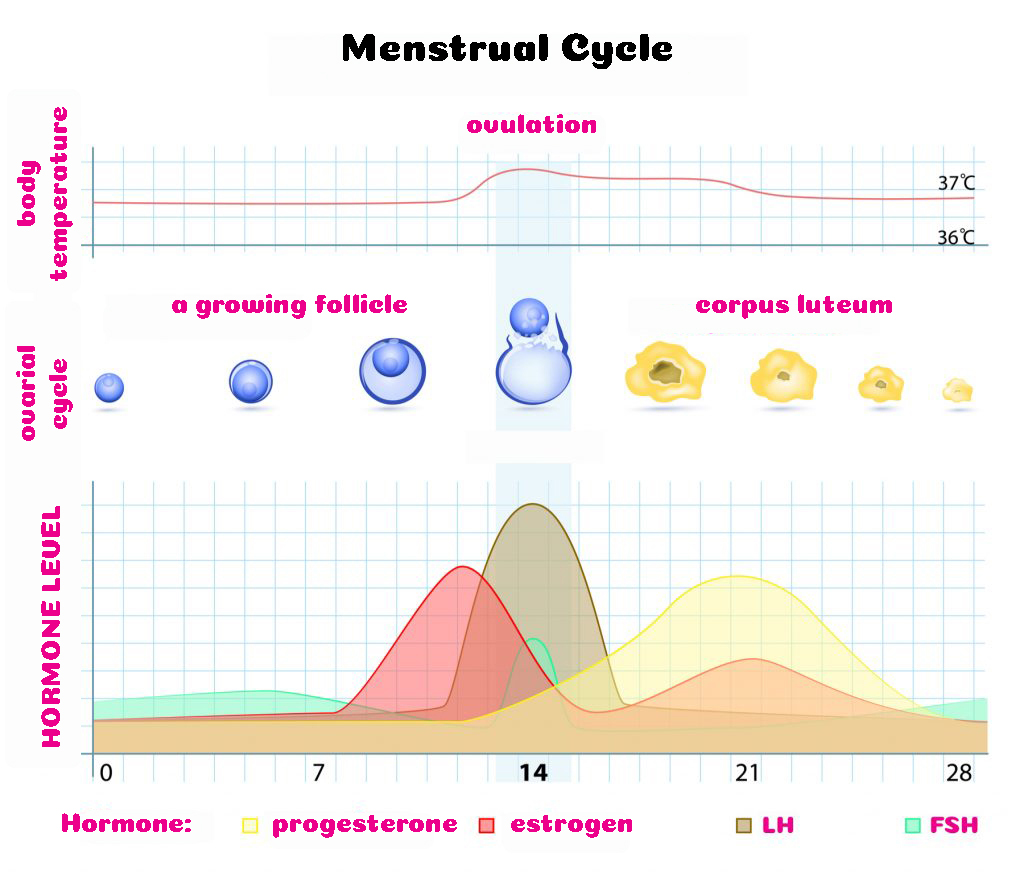 This is how it should be… However, when our hormones are “at “loggerheads with each other”, some or all stages of this process may be absent. When estradiol levels are too low, endometrium may be too thin and menstruation may be absent or very short and “pale”. Too little follicle-stimulating hormone means that the egg will be underdeveloped and of poor quality, but also that the level of oestrogen will be low. Without progesterone, the endometrium of the uterus will not separate and peel, and without enough oestrogen, which could be called the conductor of our sex hormones, not only will the whole process fail, but we will also be constantly tired, listless, pimpled, unfeminine…

Unfortunately, the fact that we feel bad is just the beginning, because hormonal disorder is an ideal ground for a series of disorders that are difficult to treat, some even not treatable at all, and they greatly impair our quality of life and may lead to infertility. Probably the most severe and painful of them is endometriosis, but polycystic ovary syndrome is no better, uterine fibroids, cysts, fibrocystic breasts, while unpleasant and excessive symptoms of PMS are almost guaranteed. Each of these disorders also affects the level of our fertility, so one day when we decide to become a mother, we are faced with the harsh truth that it will not go that smoothly.

A girl who has her first period, menarche, will take some time until the cycle becomes regular and ovulation is established. Thus, menstrual periods with irregular duration, less bleeding, irregular cycle and uneven cycle length from month to month are possible, especially during the first two years. However, frequent oligomenorrhoea – irregular menstruation – during the first two years of menarche can increase the risk of this irregularity becoming more frequent later. In girls, menstruation can still be of different duration and frequency due to not as yet sufficiently coordinated hormones. Although it is commonly said that menstruation occurs every 28 days, those that occur every 26 to 32 days are also considered normal.

But if menstrual bleeding often lasts longer than seven days and is so heavy that the pad or tampon must be changed every couple of hours, it is necessary to see a gynaecologist, because heavy menstruation can lead to severe anaemia, in addition to indicating that there may be a problem.

Bleeding between two periods can signal that we need to take a little more care of our reproductive organs. It may indicate a hormonal imbalance, an inflammation of the uterus, ovaries or bladder, or the presence of fibroids or cysts. In the first three months of using contraceptive pill, bleeding can also occur outside the cycle, and in some women it also occurs during ovulation.

The only period in a woman’s reproductive life when it is normal to expect menstruation to be absent is during pregnancy and after childbirth. It is not possible to determine exactly when the first menstruation after childbirth will occur, because every woman is a story for herself. Pregnancy represents a special situation in which different rules apply, and there is also a particular regime of hormone secretion. After giving birth, it takes time for hormones to return to the balance that existed before pregnancy. Also, a woman should now breastfeed her baby, something that provides the hormone prolactin, which also takes care of the absence of ovulation. Therefore, menstruation does not occur. It will reappear after about ten months and will most likely be irregular at the beginning, for 14 to 45 days. Menstruation itself can be completely different from before, with increased or scanty bleeding, greater or lesser pain in the small pelvis, bleeding that looks like the last day of menstruation and that may intensify … After about six cycles, the frequency of menstruation should normalise. As everything is unpredictable during this period and we cannot be sure of when our fertile days are, we should use appropriate protection if we do not plan next pregnancy immediately. 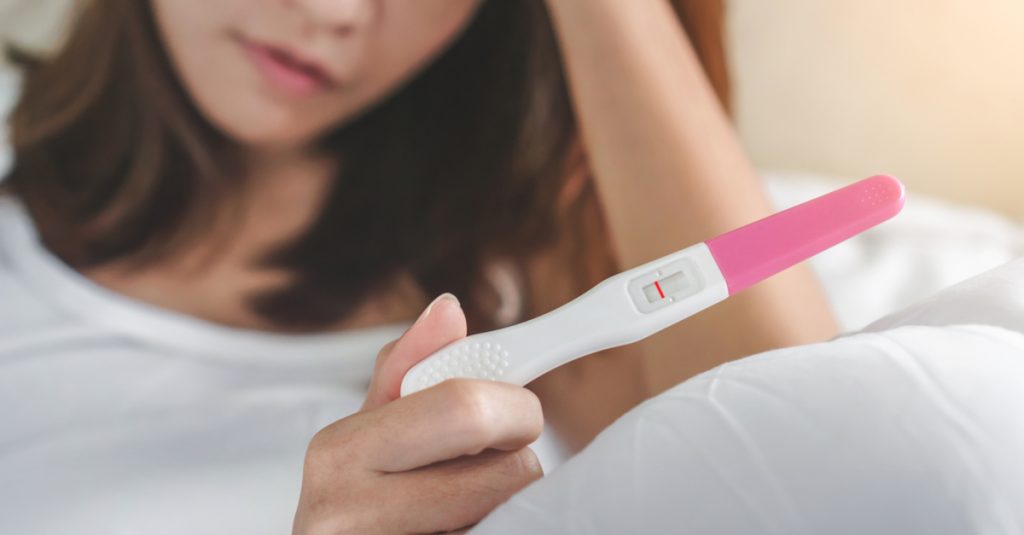 WHAT IF MENSTRUATION IS LATE?

If your period is late, even if you use contraceptives, first you must rule out pregnancy. Various factors can lead to the absence of the menstrual cycle: stress, sudden weight loss, excessive physical exertion or physical activity, thyroid dysfunction, birth control pills or certain medications … Menstruation is absent in women who are entering menopause; it may begin to thin out even ten or more years before menopause. At that time, changes in the menstrual cycle are accompanied by specific symptoms such as sudden hot flashes, nervous system irritability, insomnia, weight gain, while reduced levels of the hormone oestrogen affect bone density and our overall health, including the cardiovascular system; therefore, women are advised to take supplements that will prevent a drop in vitamin D and calcium levels.

However, causes of irregular periods and changes in the menstrual cycle can be due to polycystic ovary syndrome (PCOS); it does not only occur due to hormonal imbalance and the excessive secretion of androgenic hormones and is characterised by the absence of ovulation, but also causes unpleasant side effects such as acne, excessive body hair or baldness, obesity, and often goes hand in hand with metabolic syndrome and diabetes. Irregular cycles and PCOS also increase the risk of ovarian cancer.

The most serious cause of changes in the cycle is cervical cancer, which can cause bleeding between periods or excessive menstruation. This type of cancer in most cases is caused by the human papilloma virus which is transmitted through sexual contact and some of its strains are high risk. This can be very easily determined by the PAPA test, which every sexually active woman should do every year, or more often if risky sexual contacts take place.

That is why it is important to act as soon as we notice that our cycle is not regular. In addition performing obligatory and regular gynaecological checkups and following doctor’s advice, herbs can be of great help. Lady’s mantle, yarrow, marigold, herb robert, shepherd’s purse, raspberry leaf… All these plants are popularly known as great friends of women, and today can be found in a modern and professionally made preparation: Femisan A. It can be consumed as drops – tinctures, or capsules enriched with zinc and golden maca root. They are very easy to use and are adapted to the pace of life of every modern and busy woman. Femisan A ensures not only that menstruation always comes on time, but also that the hormones are in balance and that disorders brought about by their imbalance are prevented or indeed eliminated. 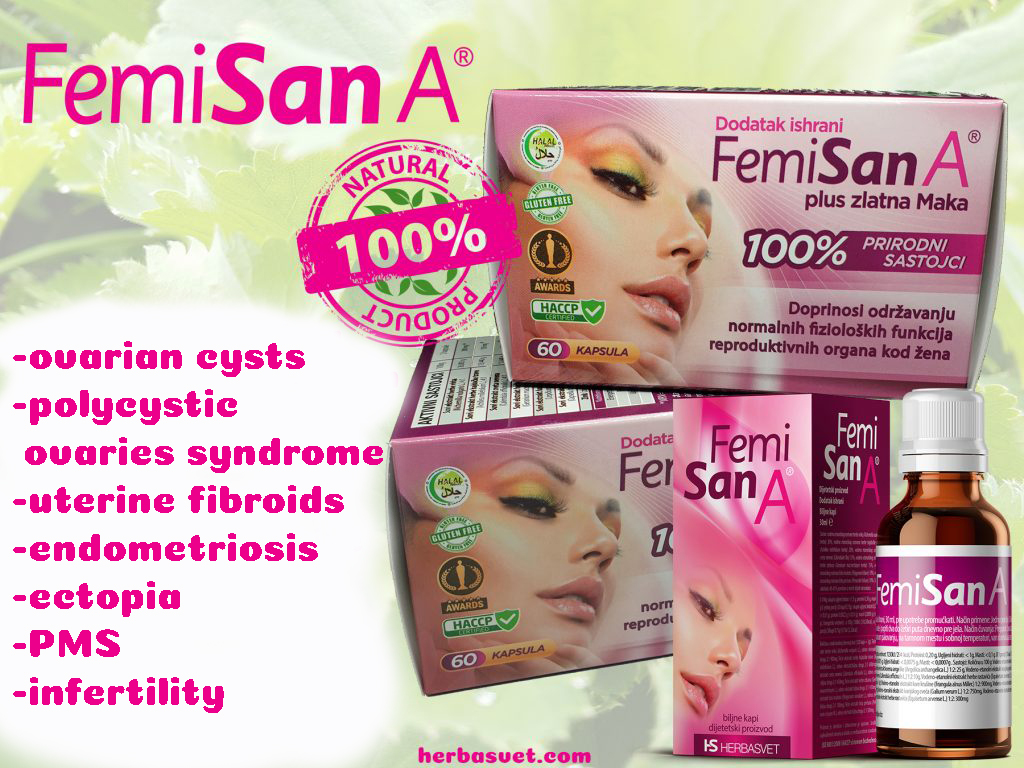