One in six couples in the Balkans today has a problem with sterility; in Serbia, as many as 4,500 couples are unable to become parents. In the fight against sterility, it is important to be well informed and to understand what can cause it.

Sterility or infertility is the inability to conceive and achieve pregnancy. Sterility is divided into primary and secondary. Primary sterility is defined as not being able to get pregnant despite having regular and unprotected sex for at least a year for most couples. The same situation applies to couples struggling with secondary sterility, the only difference being that during their life together the couple managed to have at least one child earlier.

Statistical data show that the obstacle to pregnancy is 40 per cent down to men, 50 per cent down to women, and in 10 per cent of cases when everything seems to be fine with both partners, the problem is unknown, unexamined, possibly endocrinological, or there was an immune reaction due to incompatibility of the couple. In about a third of couples, the problem exists in both partners, while in 40 per cent of cases there are several simultaneous disorders that are the cause of sterility.

In 25 percent of cases in women, the problem is the release of an egg from the ovaries – anovulatory cycle. In this case the woman has a normal period but does not ovulate. Otherwise, when all is normal, a woman has nine or ten cycles with ovulation and two or three without ovulation in a year. However, over the years ovulation may become increasingly absent, even though the periods remain regular. The age of a woman therefore, unfortunately, greatly affects the possibility of conception, so women who postpone having a child may have many unsuccessful attempts to conceive once they decide to become a mother later in life.

In the remaining 25 per cent of cases, the problem may be connected with the transport of the ovum to the ampulla of the fallopian tube, where the spermatozoon needs to fertilise it, so that it then descends towards the uterus and implants in the endometrium. The problem can arise due to inflammatory processes in the endometrium or the fallopian tubes or due to blockage.

Today, diseases of the reproductive tract which directly affect fertility are very common in women. The World Health Organisation has listed the most common factors that affect infertility, and the first on the list are ovulation disorders and endometriosis. With endometriosis, statistical data shows that four in ten women with this disorder have a problem with sterility. Another common disorder characterised by elevated androgen levels and ovulation disorders is polycystic ovary syndrome – PCOS. Women with PCOS usually fail to get pregnant without IVF. Operations to remove ovarian cysts negatively affect the ovarian reserve. Fibroids, benign tumours on the uterus, can also be the cause of infertility, since a healthy endometrium (the inner lining of the uterus) is necessary to accept a fertilised egg cell.

Finally, viral and bacterial infections, such as infection with human papilloma viruses (HPV) or chlamydia, especially if not treated in time, can cause damage and be the cause of infertility.

When it comes to male sterility, it often occurs as a result of insufficient production of spermatozoa, i.e. seminal fluid and problems in its transport. This can be a consequence of congenital disorders, frequent inflammations at the testicular level, chronic diseases, infections or circulation disorders in the genitals. No measurable sperm in a man’s semen is called azoospermia, which can be solved by surgery, if it is obstructive.

Some of the factors that affect male fertility, i.e. a low sperm count, are depression, bad lifestyle habits, obesity, and even carrying a mobile phone in a trouser pocket.

However, it is not rare to see cases in which conception occurs, but after some time everything ends in abortion. Recently, the results of an American clinical study  were published, which looked at women who had multiple consecutive miscarriages – although pregnancy would start, it was not possible to sustain it. The study analysed semen from 49 men whose partners had three or more consecutive miscarriages before the 20th week of pregnancy. At the annual meeting of the Endocrine Society, scientists reported that the sperm of these men had twice as much genetic damage and four times the amount of harmful molecules called reactive oxygen species as samples of healthy men who had been screened for some fertility issues. 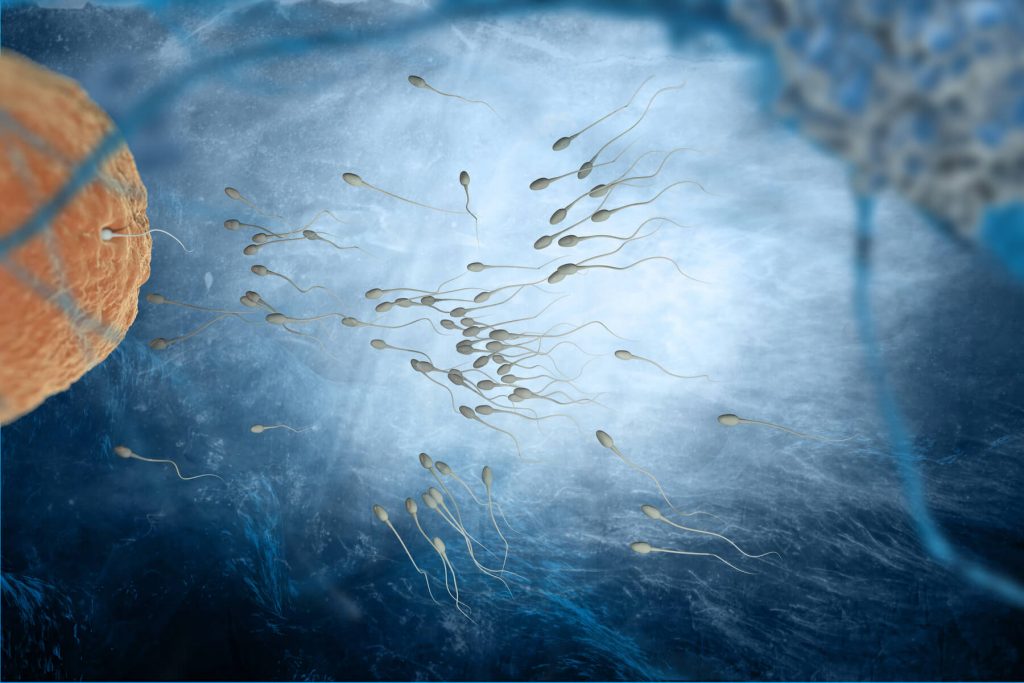 When it comes to consecutive miscarriages, doctors have until now mostly seen them as the result of a women’s health problems, for example errors in chromosomes, hormonal problems or blood coagulation disorders. However, in up to 50 percent of cases there was no explanation. Earlier research had proved that sperm played a role in the development of the placenta and its functioning, which is the most important prerequisite for the prevention of miscarriage. But no one connected the quality of sperm with miscarriages; it was mostly the number and mobility of spermatozoa that were analysed before conception. This study opens the door to new research projects that should shed light on the cases that have been unclear till now.

Bad sperm count can be determined by a urologist, based on semen analysis. Just as women have regular gynaecological checkups – as a necessary part of taking care of their own health – so should men have regular urological checkups. For both men and women, regardless of whether they are planning to have children or not, it is important to react if any symptoms appear.

Infertile couples today can seek the help of a reproductive health specialist who will give them the necessary advice and, above all, try to determine the reason of infertility. Sometimes the diagnosis in women is reached through laparoscopy, an endoscopic method that allows direct insight into the condition of the reproductive organs; for men, a sperm count test is necessary to determine whether there is a disorder in the production and function of spermatozoa.

And what is it that couples themselves can do today? Couples who are planning a pregnancy should be aware that their lifestyle greatly affects the future offspring. Unhealthy diet, alcohol, tobacco, sedentary lifestyle, tight clothing, insufficient sleep and exposure to toxins and radiation have a very negative effect on the hormonal balance and fertility of both partners. In addition to an orderly life and taking care of one’s body and mind, there is also help from nature for all couples planning to have children. 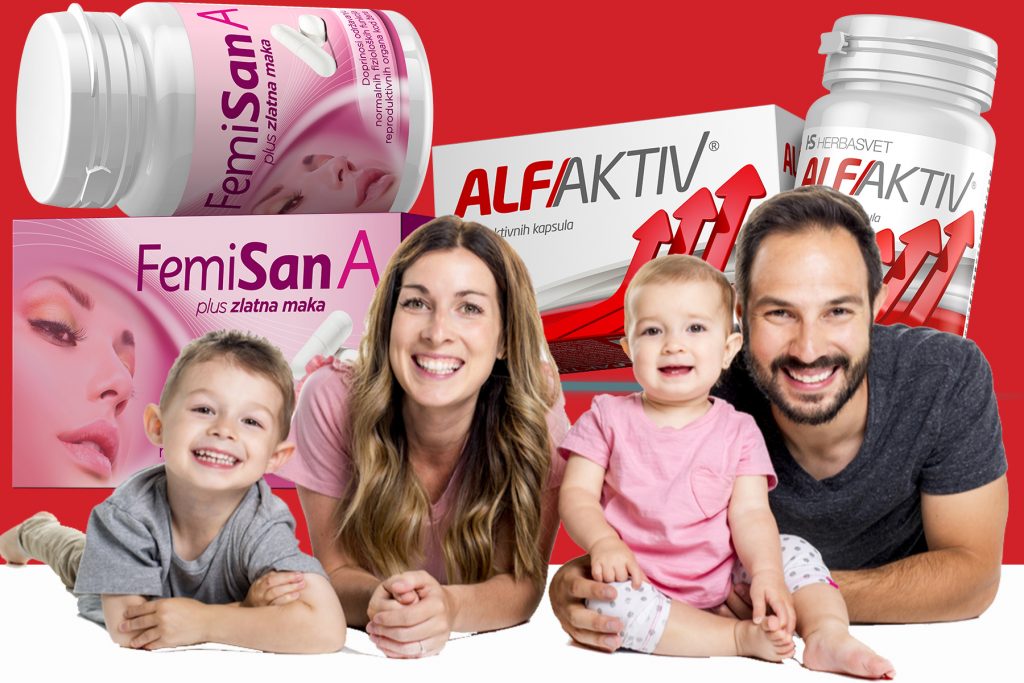 Femisan A helps women to regulate hormonal imbalance and strengthen fertility. This natural preparation based on medicinal herbs stimulates ovulation, strengthens the endometrium of the uterus and increases the chances of having a mature egg that can be used for fertilisation. It also helps with disorders of the female reproductive system that negatively affect fertility: cysts, fibroids, PCOS and frequent inflammations of the urogenital system. Medicinal herbs, unlike hormonal therapy, produce an effect slowly and gradually, but it is more long-lasting. That is why it is important to use the preparation over a long period of time.

Alfa Aktiv helps men to increase the concentration, number and mobility of spermatozoa, and helps maintain good and rapid ejaculations. L-carnitine in the preparation helps spermatozoa to mature, while damiana promotes microcirculation in the genitals. As spermatogenesis naturally lasts between 72 and 90 days, the preparation must be taken for at least 90 days.

With Femisan A and Alfa Aktiv, the statistical data is just a number, and babies are bound to come. 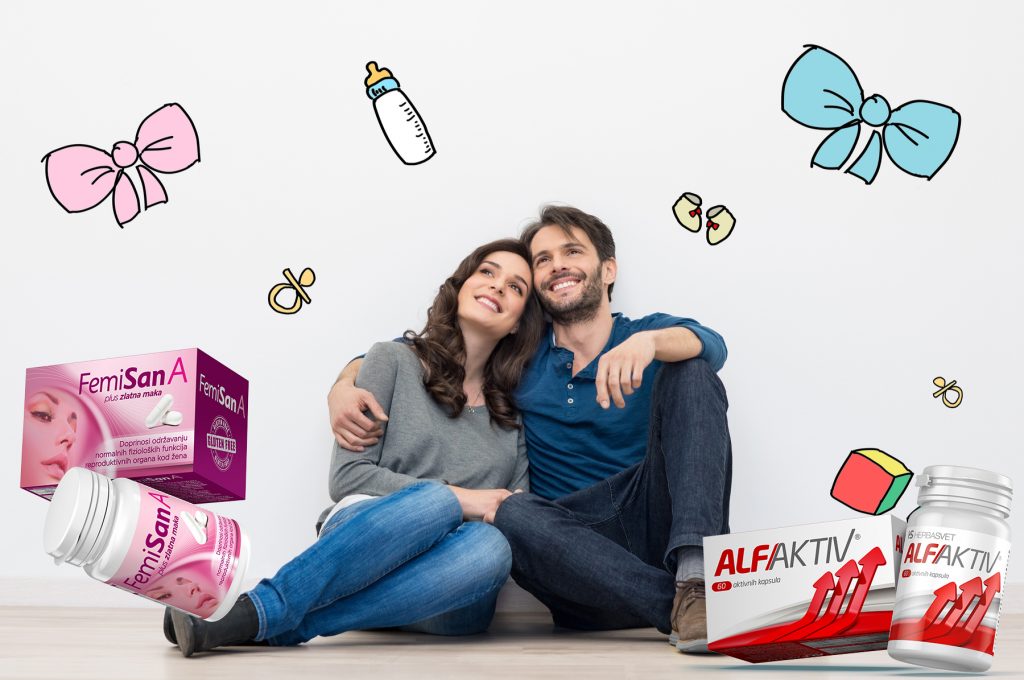