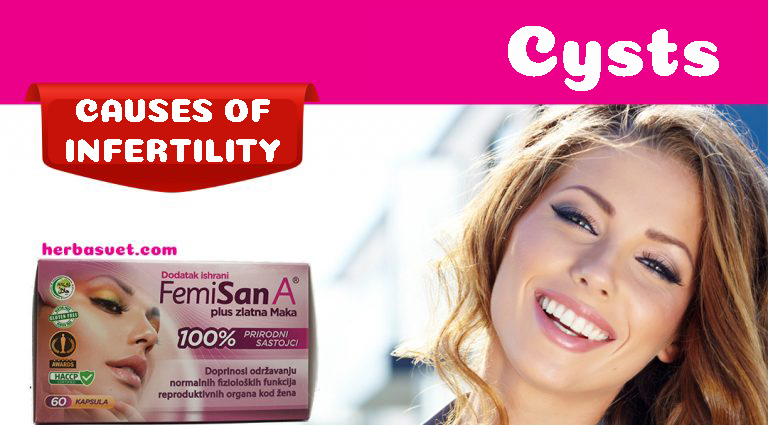 Ovarian cysts are very common, usually painless and asymptomatic. Although most women have a cyst at least once in their lifetime, of which they may not be even aware of, this change is not negligible and can sometimes lead to serious complications. That is why it is necessary to see gynaecologist regularly and be properly informed.

HOW ARE OVARIAN CYSTS FORMED?

In women of reproductive age, each month one ovary releases one egg into the follicle – a space filled with fluid, which then releases it into the fallopian tube. The follicle then bursts and is absorbed. This is an ideal scenario, but things don’t always go to plan…

Sometimes it happens that the follicle does not rupture and does not drop the egg cell, but begins to grow as fluid accumulates inside. This is how a watery or follicular cyst forms on the ovary. It usually stays there for a while, does not affect the menstrual cycle, and then breaks on its own. This could cause sudden pain that should not last longer than a couple of days. Such cysts can affect one or both ovaries.

Sometimes it happens that the follicle does not get absorbed after the release of the egg and the opening on it closes, so fluid that creates the so-called luteal cyst (corpus luteum cyst) accumulates. It disappears on its own after between a couple of weeks and two cycles and can cause out-of-cycle bleeding and pain. There is also a hemorrhagic cyst that occurs when a blood vessel ruptures causing the blood to fill the cyst. These are all functional cysts, which means that they appear under the influence of hormones during the menstrual cycle and are not associated with any disease. In women who enter menopause, the appearance of functional cysts is significantly reduced.

Non-functional, pathological cysts are tumours that can be benign or malignant. Benign tumours are more common in younger women, malignant in older women. In postmenopausal women, removal of the cyst and its analysis are usually recommended, in order to determine possible malignancy in time. Dermoid cysts originate from embryonic cells and they can also contain its tissue, skin and even teeth. They are usually benign. Another type of mostly benign tumour is cystadenoma or mucinous ovarian cyst which grows rapidly and is one of the largest tumours in the human body. In 2014, the medical profession recorded a case of a 63-year-old woman who had such a tumour that weighed 27 kilograms removed. Cystadenoma had filled the entire abdominal cavity and put a lot of pressure on the diaphragm and lungs. This is another case that confirms the importance of regular checkups and prevention.

Another type of non-functional cysts are endometriomas or chocolate cysts. These cysts occur as a consequence of endometriosis, a disorder in which the tissue of the endometrium, the inner lining of the uterus, accidentally reaches internal organs, including the ovaries, sticks to them and forms cysts that are filled with blood. In addition to causing severe pain, chocolate cysts can negatively affect a woman’s fertility especially during menstruation.

With the exception of cystadenomas, cysts are in most cases small or sometimes grow over 10 centimetres. In women of reproductive age, most ovarian cysts are functional, benign, and do not require treatment. The gynaecologist will usually only monitor cysts; however, there are situations that require surgery. For example, if a cyst remains on the ovary for more than three cycles, or grows over 10 centimetres, treatment is needed; should that fail, the problem is resolved laparoscopically. In very rare situations, an ovarian cyst becomes cancerous, and this can be determined by examination and tumour markers. A study that followed 1,919 women who had cysts concluded that it is better to monitor than to remove non-cancerous cysts because 80 per cent of them were resolved spontaneously and did not require any intervention. Of this total number of respondents, only 12 women were later diagnosed with ovarian cancer, representing a risk rate of 0.4. 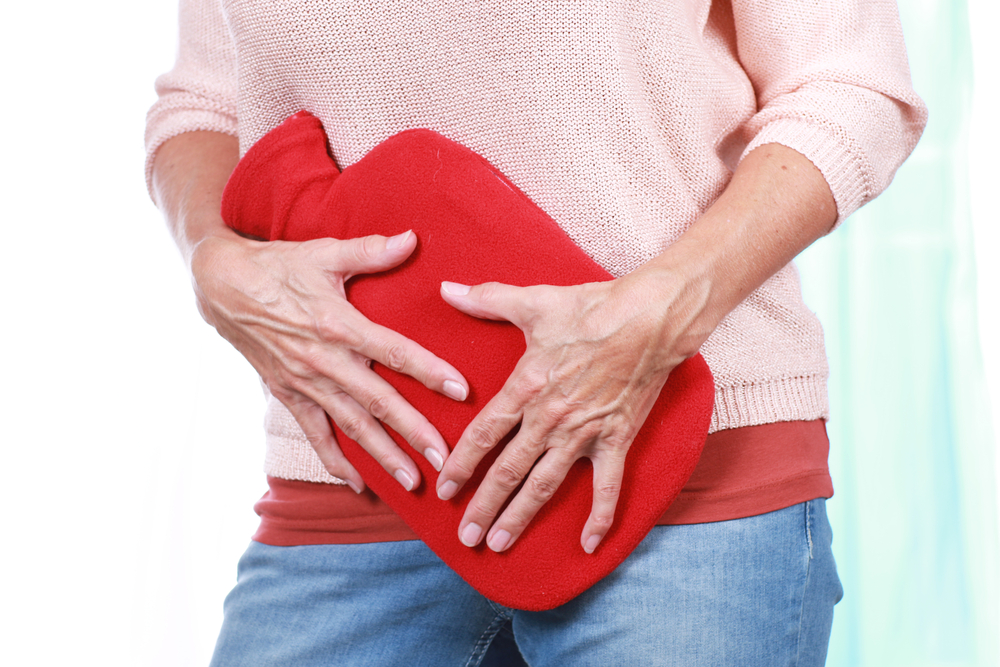 Regular gynaecological examinations are mandatory for all women, and if any disorders are discovered, it is necessary to follow doctor’s advice. Cysts are mainly diagnosed during routine check-ups with an ultrasound examination of the pelvis, when the gynaecologist can accurately determine the type and size of the cyst and can also determine if an earlier cyst ruptured in the meantime.

That cysts can occur at any age of a woman’s life was confirmed by a study that looked at 244 cases of ovarian cysts; this study included patients from 3 months old to 77 years of age.

How can we recognise if we have a cyst? Cysts can be symptomatic or asymptomatic. We need to listen to our body and see if it is giving us any of these signals:

If we also feel dizzy, if we are short of breath, have fever, extremely sharp pain in the lower abdomen and/or back and have vaginal bleeding outside the cycle, we need to seek medical assistance immediately, because it is possible that a cyst has ruptured or that the ovaries twisted, which can cause complications and internal bleeding if we do not act on time.

Twisting or torsion of the ovaries occurs when a large cyst causes the ovary to rotate or move, disrupting circulation in the ovary itself, which can lead to tissue death. It is usually very painful and is accompanied by nausea and vomiting. It can affect women of any age. Ovarian twisting requires urgent medical attention and surgical intervention in order to preserve the functions of the ovaries and fallopian tubes. Over 80 per cent of patients with ovarian twisting have developed cysts larger than five centimetres; this condition can occur with any cyst size, or even if there are no cysts present. Over 50 per cent of patients under the age of 15 who experienced torsion had perfectly normal ovaries. Torsion can also occur in early pregnancy, and the chances of that happening are greatest from the 10th to the 17th week of pregnancy.

Functional cysts by themselves do not cause infertility, but they can make conception difficult. In most cases, surgery is more harmful to the ovarian reserve than the cyst itself. The ovarian reserve is a “supply” of follicles inside the ovaries from which this reproductive organ can later produce eggs.

Cysts that can definitely affect fertility are those caused by polycystic ovary syndrome (PCOS), as well as endometrial cysts. Some studies have shown that women suffering a very mild case of endometriosis have only a two to four per cent chance of conceiving each month, compared to 15 to 20 per cent chance for healthy women. In polycystic ovary syndrome, there is a hormonal disorder due to which the egg cannot mature normally and ovulation is absent.

Cysts are not uncommon during pregnancy. They can be completely harmless, or in rare cases may grow uncontrollably, rupture or cause ovarian twisting, and even cause complications during childbirth.

HOW TO TREAT OVARIAN CYSTS

If cysts are causing us symptoms, there are little tricks how to alleviate them:

After the diagnosis of ovarian cysts, the gynaecologist may recommend the use of contraceptive pills because they will prevent ovulation and thus the formation of new cysts. However, there are conflicting opinions as to how effective contraceptive therapy is for cysts, or whether any therapy is needed at all, especially for functional cysts.

As mentioned earlier, most cysts disappear spontaneously. However, that does not mean that we should ignore them. If we are prone to cysts, it is better to prevent their occurrence. There is an excellent and natural way of achieving this: Femisan A. This natural preparation based on medicinal herbs accelerates the bursting of cysts and prevents the formation of new ones. In addition to being very effective in ovarian cysts, Femisan A contributes to hormonal balance, regular menstrual cycle, helps relieve PMS symptoms, as well as disorders such as polycystic ovaries, uterine fibroids, endometriosis and ectopia. Femisan A contributes to the strengthening of reproductive organs, stimulation of microcirculation in the ovaries, strengthening of the endometrium of the uterus, so it provides ideal help to women who are trying to conceive. Femisan A is an ally of every woman, from puberty to menopause. 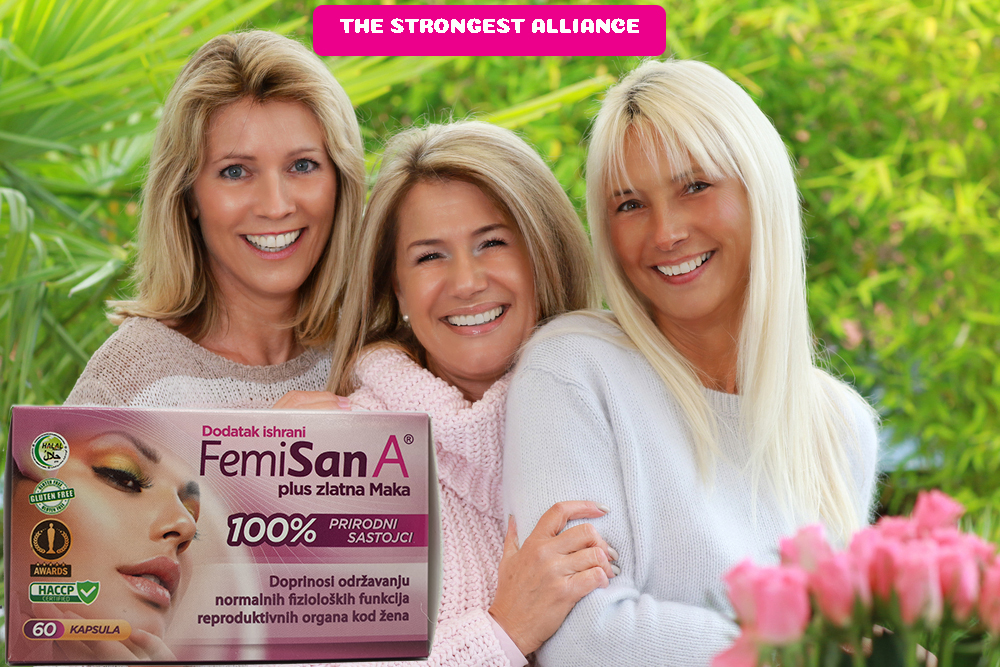