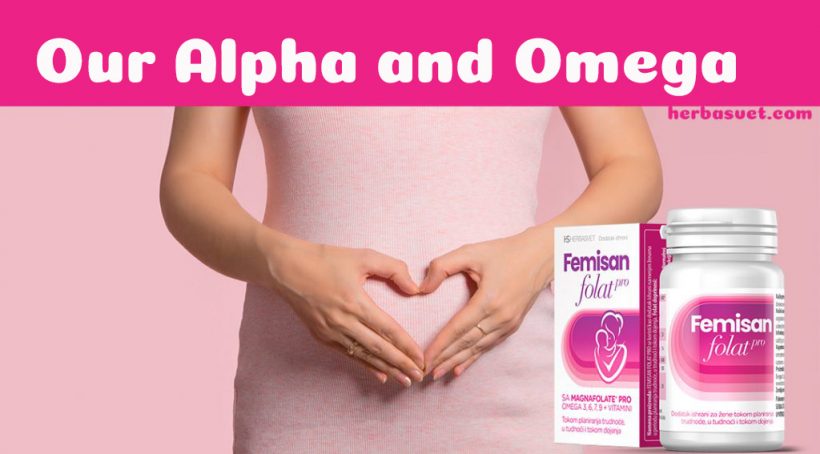 Humans have always used fats in their diet, and although they came from healthy and natural sources, such as olive oil or animal fats, not much thought was given to their composition. It was only important to fill the stomach, and fats perfectly contributed to the feeling of fullness. It was not until 1929 that George and Mildred Burr published an expert paper in which, after complex and painstaking analyses, they explained the importance of fatty acids for health, specifically linoleic acid. This American couple then coined the name for them – essential fatty acids. The Burrs explained that fats are much more than mere calories, and that they are necessary for the normal physiology of the body. “Fatty acids play an important role in several metabolic and structural functions, are an essential part of cell membranes, are responsible for the transport of vitamins and for regulating the concentration of plasma lipids. They also produce a number of precursors such as eicosanoids, steroid hormones and bile acid, which are all foundations of a healthy metabolism. They are also the most important energy nutrient – it is recommended that at least 20 per cent of the total energy intake should be from lipids”.

WHAT IS SEA BERRY?

Probably the most famous essential fatty acids today are omega 3 and their source – sea fish. Only recently, a seemingly inconspicuous thorny bush became the focus of scientific research, which turned out to be an incredible treasure trove of essential fatty acids: sea berry (Hippophae rhamnoides). Although its English name is sea berry or sea buckthorn, it has little to do with the sea. It grows in the vast expanses of Eurasia, from the Caucasus, through Siberia, Nepal to Pakistan and India. The whole plant is edible and medicinal – its berries, leaves and bark, as well as oil that is extracted from the seeds or pulp of the fruit. Mature seeds contain 8 to 20 per cent of oil, while dried fruit pulp has 20 to 25 per cent. In addition to 11 fatty acids, it is rich in phytosterols (it contains as many as 14 of them, including beta sitosterol), polyphenols, carotenoids, quercetin, kaempferol and vitamins A, B, C, H, PP and E.

The composition of fatty acids in sea berry oil is completely unique and has a number of health benefits for the human body, which is why it is increasingly present in medicine and the cosmetics industry. The complex composition of this oil does not only display antioxidant, anti-inflammatory and antidepressant properties, but it also makes a significant contribution to the treatment of cerebrovascular and cardiovascular disorders. It also has the ability to relieve skin disorders such as eczema, acne or psoriasis. What makes this completely vegan oil completely unique is the fact that in addition to omega 3, 6 and 9 essential fatty acids, it also contains the very rare ones from the omega 7 group. What makes omega 7 special? 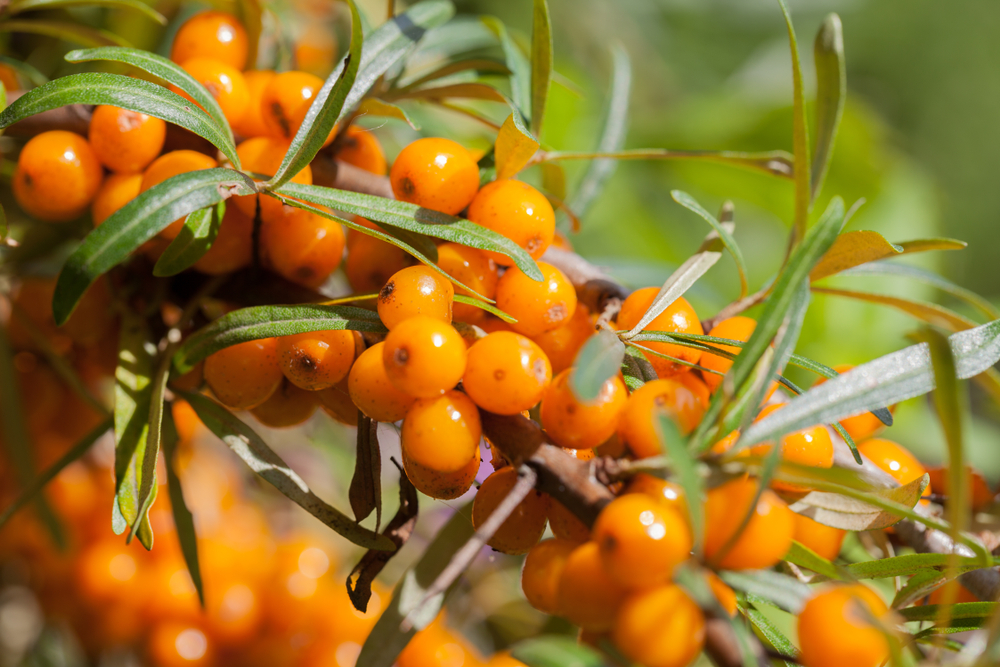 Palmitoleic acid, or omega-7, while very rarely found in plants, is found in the soft part of sea berry. The oil obtained from the skin and pulp of the fruit contains up to 43 per cent palmitoleic acid. So far, studies have shown that it is extremely beneficial in vaginal inflammatory atrophy, skin hyperpigmentation, skin injury infections, bacterial infections, hypercholesterolemia, diabetes and liver disorders.This fatty acid plays an important role in lowering cholesterol levels and its connection with the liver’s sensitivity to insulin has been discovered. Thus, the intake of omega-7 fatty acids controls both insulin resistance and type 2 diabetes.

Metabolic syndrome is a disease of the modern era. It is a combination of deposits of visceral (deep) fat and insulin resistance accompanied by elevated levels of triglycerides and cholesterol in the blood and high blood pressure. Without exaggeration, body fat can be said to be a separate organ that secretes harmful molecules such as adipokines, which alter the metabolic activity of tissues and cause inflammations. The result is insulin resistance, when the tissue is simply unable to respond to elevated levels of insulin in the blood. Insulin resistance is a harbinger of type II diabetes. Studies have shown that omega-7 fatty acids have a beneficial effect on blood sugar regulation and the metabolism of fat. Thus, they contribute to a significant reduction in atherosclerotic plaque and other cardiovascular risk factors. It has been proven that after taking omega-7 supplements, atherosclerotic lesions are reduced by 45 per cent and triglycerides by 30 per cent. And finally, omega-7 helps us to be more beautiful: studies have confirmed that these fatty acids inhibit inflammations and accelerate collagen synthesis, thus slowing down the ageing process of the skin.

In addition to palmitoleic acid, sea berry is also rich in oleic acid, a substance that the famous Mediterranean diet abounds in, and which is extremely successful in preventing cardiovascular disorders.

Of the polyunsaturated acids, this oil contains alpha linoleic acid, which has been proven to reduce the risk of cardiovascular disorders, but it also prevents dry eyes and strengthens bone health. All of this is especially important for women entering menopause when they are at an increased risk of cardiovascular disease and osteoporosis. A study of the relationship between these fatty acids and bone density in women has proven that they significantly contribute to the health of hip bones and lumbar spine.

Sea berry oil is also rich in linoleic acid which helps with skin disorders, psoriasis and atherosclerosis. Linoleic acid stimulates the functioning of sebaceous glands, unclogs pores and prevents blackheads.
There is also gamma-linolenic acid, omega-6, which has a positive effect on the skin as it prevents acne, eczema and restores the mucous membrane of the eye, and it is also important for women in their reproductive period as it contributes to the lessening of pre-menstrual symptoms.

After all, the conclusion is clear: sea berry oil is an ideal fighter for a healthy heart and blood vessels, strong bones, clean and beautiful skin and healthy mucous membranes. That is why its cosmetic use is becoming more frequent. Studies have shown that it achieves higher skin hydration – by as much as 49 per cent, better skin elasticity – by 26 per cent and reduced roughness – by 18 per cent. It has been proven to help with problems associated with vaginal dryness, which was examined in a study on a sample of women aged 37-66. It effectively moisturises eyes and prevents dryness by 69 per cent and reduces the burning sensation in the eyes by 43 per cent.

If essential fatty acids are vital for normal functioning, their role doubles during creation of a new life. These nutrients are elementary during pregnancy and nursing, as it has been proven that they participate in normal development of the nervous system and organs, among others the brain and eye development in foetuses. Scientists became interested in essential fatty acids following an observation at the end of last century, that the babies from the Faroe Islands were noticeably bigger than those in Denmark. Since oily fish, rich in essential fatty acids, is a very common part of nutrition of inhabitants of these islands, the mothers also had more successful pregnancies and healthier babies.

Later research connected this knowledge with new experiments, and the conclusion was made that not only were the babies bigger and healthier if their mothers had had abundant omega fatty acids, they also developed better during childhood, had better mental and psychomotor abilities and had superior cognitive functions to their peers. The pregnancy itself is much safer, as statistics show that risk of miscarriage is thus much smaller.

The influence of essential fatty acids on metabolism is vital for the conception, as well, especially in women suffering from the polycystic ovaries syndrome (PCOS), and are advised to increase the intake of these nutrients, especially when planning a pregnancy.

Why are essential fatty acids important for the mother? Research has shown that these nutrients reduce risk of preeclampsia, early delivery and postnatal depression. It is proven that adequate intake prevents the risk of gestational diabetes. They are important in the period of lactation, as well, since they are an essential ingredient of mother’s milk, and breastfeeding women need to increase their intake. Deficiency in essential fatty acids can cause breast pain, both as a pre-menstrual symptom and after delivery. And finally, there is also the matter of aesthetics. Since pregnancy inevitably changes the body, every woman finds it important not to gain too much weight and to be able to lose the extra kilos following the delivery. That is also something that the essential fatty acids can help them with: research has shown the connection between the sufficient intake of these nutrients and normal body mass index during and after pregnancy. They will also have a positive impact on the skin and contribute to a clear complexion, which is another secret of pregnant women that “bloom” when they are expecting.

For all these reasons, the best quality sea berry oil, Omegia®, is a part of the supplement created for women planning pregnancy, during pregnancy and while nursing: Femisan Folat Pro. With currently most superior form of folic acid, Magnafolate® PRO, vitamins B6, B12, biotin and vitamin C, this supplement coming from the Herba Svet laboratory takes care first of all, that the pregnancy occurs, that it continues in perfect order, and that both mother and baby are healthy. The sea berry oil coming all the way from the mountains of Tibet takes care of that, because distances and heights are no obstacle for mothers when it comes to their babies’ health.