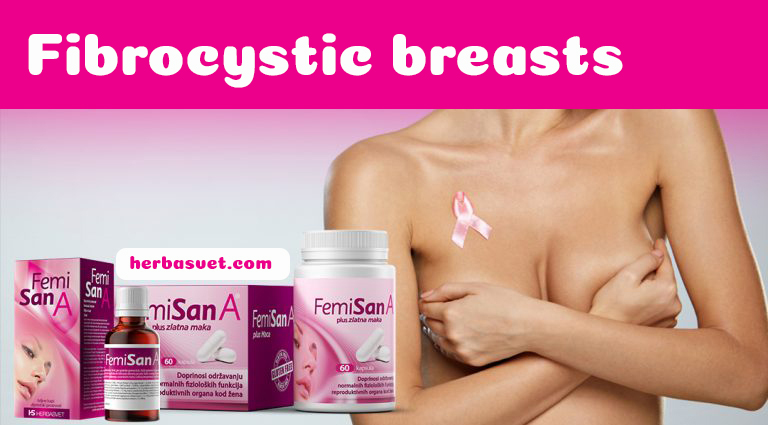 Women’s breasts have been much more than just a part of the body since time immemorial. They are a divine symbol of fertility, creation and motherhood, and today they are an indispensable part of female aesthetics. That is why physiological changes on the breasts are more than a disorder and represent a source of worry for many women, not only physically but also psychologically. One of such changes are breast cysts.

BREASTS AS A SYMBOL

In 1908, archaeologists discovered a figurine dating back to 25,000 years before the current era near Willendorf in Austria. Only 11 cm long, this limestone sculpture depicts a female body, which is immediately associated with fertility. The most striking body part of this Venus, as the figurine was soon baptised, are its breasts. The figurine was tinted with red ochre, which most likely symbolised menstrual blood, the life-giving element. It is assumed that the Venus of Willendorf was a symbol of the goddess of fertility and that it was used in numerous ceremonies and rituals aimed at ensuring the prosperity of the tribe. This figurine also suggests that women were highly valued in a society ruled by matriarchy, thanks to their ability to provide offspring.

It is not surprising that the breasts of the Venus of Willendorf are in the foreground. Breasts have always been an object of wonder, sensual pleasure, birth and fertility. Throughout history, breasts have gone through various stages of ‘fashion’ in art, from being over-emphasised as is the case of the Venus of Willendorf, to firm and muscular breasts that can be seen on ancient statues of Venus, or swollen with milk in paintings and icons from the Christian period, to luxurious and pink during the Rubens period… In more recent times, they have gone from being almost non-existent on starving models, after Twiggy introduced this trend in the 1960’s, to today’s trend where lush and toned breasts have become fashionable again, sometimes with a little help of plastic surgery.

Before Freud, breasts had been seen as being insignificant in terms of their psychological impact; the father of psychoanalysis revealed that they had a completely special dimension. According to him, an individual’s sexuality starts developing from the moment they are breastfed; in men, it develops further during adolescence and the obsession with this part of female anatomy persists throughout life as a result of a subconscious longing for the mother.

Every woman would like to change something about her breasts, and many are obsessed with their appearance until they find a lump. Then it becomes clear to every woman that the most beautiful breasts are the healthy ones. In Serbia, about 4,000 women are diagnosed with breast cancer annually. The mortality rate is high because the disease is often detected at an advanced stage. Fortunately, not every lump in the breasts is by default cancerous. In most cases, it is about fibrocystic changes.

Breast cysts are the most common benign breast disease affecting millions of women worldwide. What symptoms are associated with breast cysts? Usually, before the period, the breasts become additionally sensitive, they may be even sore, and sometimes there is discharge from the nipples. The reason for this is that cysts are actually clear cavities filled with liquid, and as breasts naturally swell before the period, women only become aware of them at this stage of the menstrual cycle. Symptoms often disappear after the period. Like most ‘female problems’, fibrocystic diseases are closely related to hormonal imbalance, so hormones are their most common cause. When, during the luteal phase of the cycle, after ovulation and before the period, oestrogen is much more pronounced than progesterone, which should normally dominate this phase, the cells multiply rapidly in the milk ducts, which can cause narrowing of the ducts and the appearance of breast cysts. Even the smallest disturbance in the ratio of oestrogen and progesterone levels can contribute to this phenomenon. The glandular tissue of the breast becomes fibrous and women can feel changes in the tissue, lumps or nodules. These nodules, in most cases, are not tumours, but only swellings of dysplastic tissue, and as a rule, they occur in both breasts. Most often, no treatment is necessary, but they need to be monitored; as hormonal imbalance causes the formation of cysts, the restoration of hormonal balance is the way to deal with them. 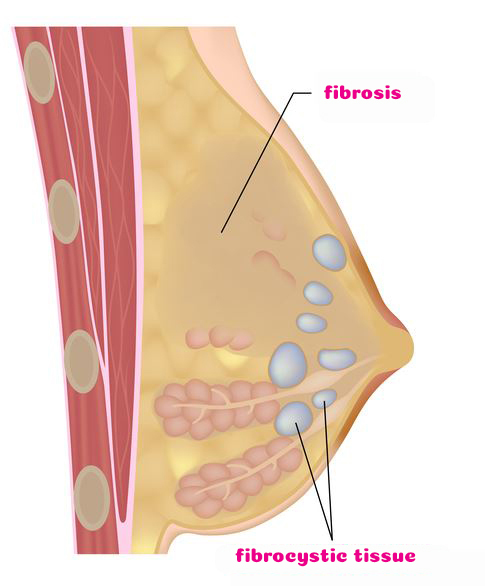 Unlike cysts, bumps or isolated nodules that are cancerous are typically large, hard and are mostly painless to the touch. Malignant tumours are most often located in the upper outer quadrant of the breast, somewhat less often in the central part, and least often in the lower quadrants. Risk factors mainly include the occurrence of breast cancer in the family, especially in the earlier period of life, before the age of 40, exposure to high pollution, diet rich in bad fats, alcohol and tobacco consumption, long-term use of contraceptives, as well as premature periods and late menopause, i.e. overextended exposure to high oestrogen levels. Obesity also increases the risk, especially in menopause.

However, even when the change in tissue felt on the breast seems completely harmless, it is necessary to seek a professional opinion. In particular, firm, irregular and hard nodules, lumps above which fine lines appear on the skin of orange-peel like texture, as well as enlarged lymph nodes under the armpits should be checked. If detected in time, breast cancer is curable in more than 90 per cent of cases.

1. In front of the mirror, check the size, shape and colour of the breasts, determine whether any distortions or swellings are visible on the surface. Pay special attention to the appearance of dimples or bumps on the skin, swollen veins, changes in the position of the nipple or its indentation, the appearance of redness, rashes or swelling.

2. Raise your hands above your head and pay attention again to see if any of these changes are present.

3. Examine the nipples to determine if any liquid, watery, milky, yellowish or bloody, comes out of them.

4. Lie down and use each hand to feel the opposite breast with the tips of the outstretched and joined fingers. Feel the breasts with circular movements, covering the entire surface, from the collarbone to the top of the stomach and from the armpit to the middle of the cleavage. Applying light pressure, feel the skin and tissue immediately below it; applying more pressure, feel the deep tissue, all the way to the ribs.

5. Once again feel the breasts in a standing or sitting position.

We can routinely repeat these procedures before showering – steps 1, 2 and 3 in front of the mirror before entering the shower, and step 5 while taking a shower. 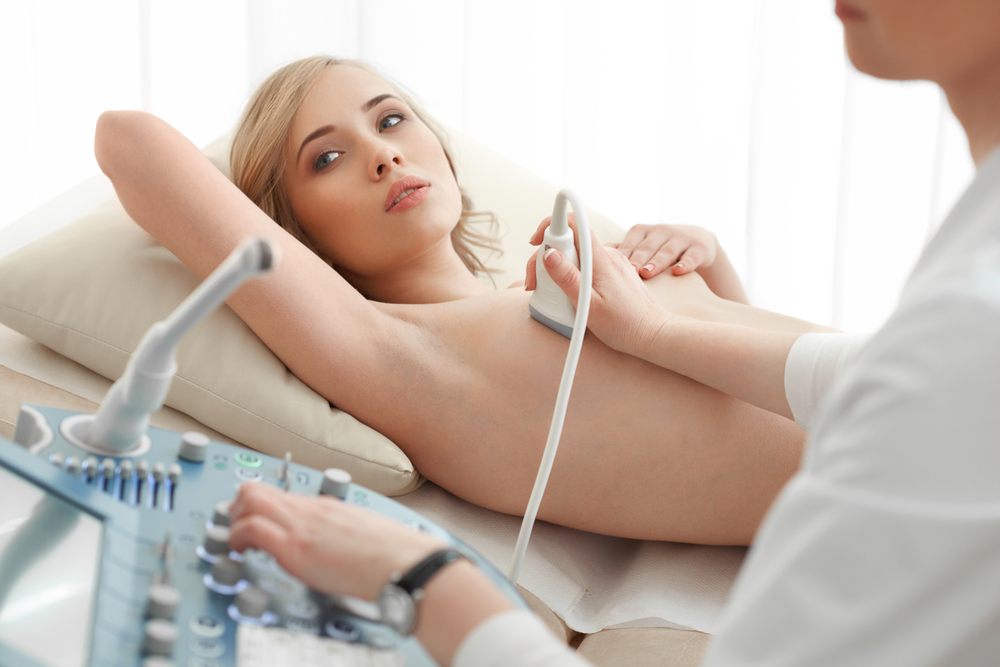 When it comes to breast cysts, the solution lies in hormonal balance. Today’s diet does not suit women because excessive amounts of sugar and unhealthy fats disturb hormonal balance. That is why it is necessary to eliminate fast food, pastries made from white flour, industrial sweets and fried food. Instead, one should increase the intake of green leafy vegetables, as well as fruits and vegetables rich in beta-carotene (recognisable by their orange colour), vitamins C, E, B6, zinc and omega 3 fatty acids. Foods rich in antioxidants, such as green tea, ginger, turmeric and golden maca, are also very helpful.

Alongside a healthy lifestyle without cigarettes and alcohol, quality food and regular physical exercise, Femisan A can also help women keep their breasts healthy. This completely natural preparation based on medicinal herbs works at the root of the problem: hormonal imbalance. Femisan A is available in two forms: herbal tincture (drops) and capsules that are additionally enriched with zinc and golden maca. In addition to solving the problem of fibrocystic changes in the breasts, Femisan A reduces the unpleasant symptoms of PMS, painful menstruation, and is also effective against ovarian cysts, fibroids, polycystic ovary syndrome, cervical ectropion and infertility.

Just like the Venus of Willendorf in her time, today Femisan A is a symbol of happy and contented women who are beautiful above all because they are healthy. 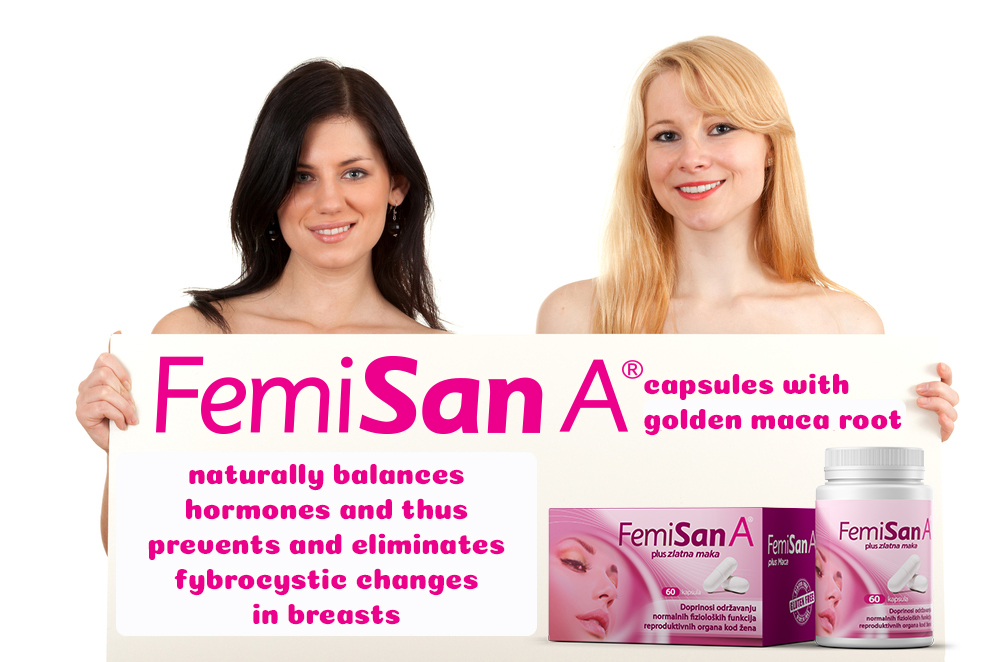