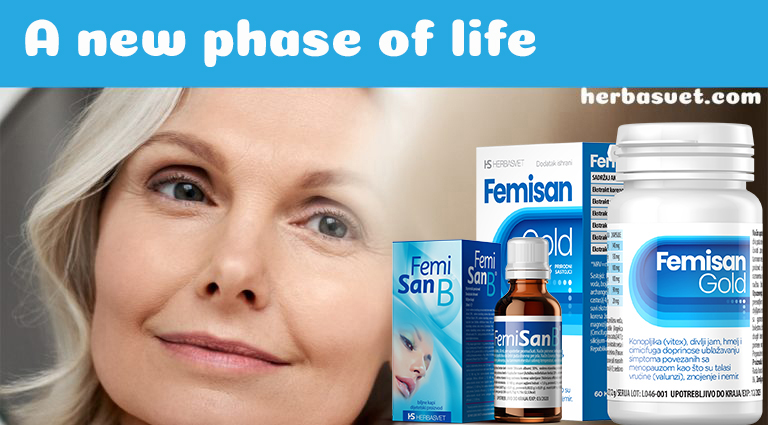 From the first period until about 50 years of age, women’s ovaries have the ability to produce eggs. Women’s reproductive period which lasts between 35 and 40 years is characterised by hormonal changes that occur in a uniform, monthly rhythm and the body’s constant readiness for possible pregnancy. Most women enter menopause around the age of 51. This change is usually not sudden, but is characterised by a period of adjustment – perimenopause.

Menopause is a period in a woman’s life that begins on average around the age of 51 and means the end of fertility due to a decrease in the level of reproductive hormones, mostly oestrogen and progesterone, and thus the cessation of the menstrual cycle. The onset of menopause generally occurs gradually, with the decline in women’s reproductive functions. This period, until functions of the ovaries are completely extinguished, may last 10 years and is called perimenopause. The first symptoms of menopause most often appear around the age of 47, but unfortunately that is increasingly happening at a younger age, so women can experience them already as they turn 40. This can be influenced by stress, genetics, some medications, especially chemotherapy, viral infections of the reproductive organs, autoimmune diseases and an unhealthy lifestyle, especially exposure to tobacco smoke.

An increasingly frequent absence of periods becomes noticeable mostly at around the age of 47, and this is the first of the early symptoms. Due to hormonal changes – a drop in oestrogen, FSH, LH and progesterone, the period can no longer be maintained because, apart from the fact that the ovaries do not produce follicles, the uterus does not go through the usual cyclical thickening and peeling. As this is a period of hormonal imbalance, after periods are absent for several months, excessive thickening of the endometrium in the uterus can occasionally occur, which results in increased menstrual bleeding. Once a full year has passed since the last period, a woman is considered to have officially entered menopause. Until then, there is still a possibility of pregnancy, although the chances are minimal. Based on the thickness of the endometrium and hormone analysis, gynaecologists can easily work out for how long a woman will still have periods and when sterility will occur.

And when the last period is far behind, menopausal bleeding can still occur in rare cases. Should this happen a woman definitely needs to see a gynaecologist who will determine the causes of bleeding and exclude the possibility of uterine or ovarian cancer. 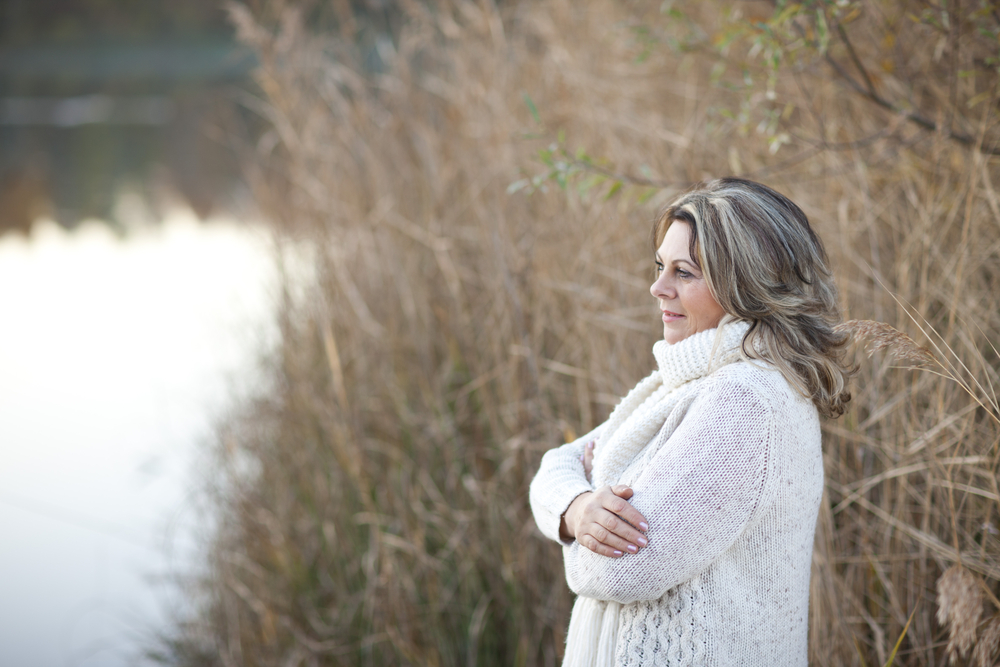 Decreased secretion of sex hormones and the weakening of ovarian functions trigger numerous symptoms and multiple changes. Although this change is natural and should not be viewed as a disease, but as a normal condition, the symptoms of menopause can be quite unpleasant:

The first experience with the symptoms of menopause can be scary, and palpitations and sudden sweating can even trigger a panic attack. That is why it is important to be well prepared and informed to avoid experiencing menopause traumatically.

HOW LONG DOES IT LAST?

An introduction to menopause – perimenopause – usually lasts for about four years; one year after the last period a woman is officially regarded to have entered menopause. The period that follows is called postmenopause. This is the golden age for women when priorities change and, if women continue to work on themselves, it can be a very beautiful and productive age. In addition to taking care of the body and mind, it is especially important to pay attention to one’s health because, as women lose the protective embrace of oestrogen, they become more susceptible to disorders that can cost them dearly.

Every woman experiences this transitional period in her own way, but the fact is that metabolic changes that occur at that time can affect the emergence and development of a number of diseases, especially cardiovascular diseases and osteoporosis. The lack of oestrogen is directly related to the decrease in bone mass, which begins as early as the age of 35, that is, a decrease in calcium, the mineral that is the most important building material of the bones. Up to the age of 50, women need 1,000 mg of calcium a day, and once in menopause that amount increases to 1,200 mg. That is why in menopause it is very important to consume food that contains enough calcium, such as dairy products (preferably fermented) and leafy green vegetables. Another bone builder is vitamin D. Before menopause, women need from 400 to 800 international units, and after it between 800 and 1000 units. About 20 minutes of sun exposure a day can satisfy our needs for this vitamin, but since sunlight is not abundant throughout the year, women need to make sure they get it through supplements. 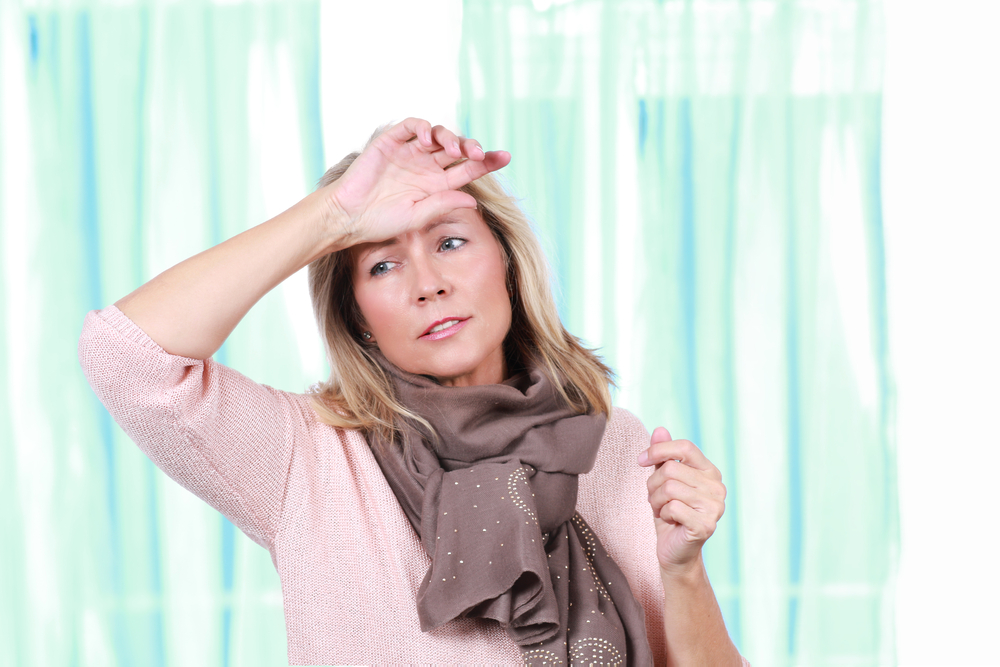 Osteoporosis is a silent disease and usually goes unnoticed until drastic symptoms appear. It is most often detected after falls and bone fractures and its worst manifestation is the deterioration of the spinal vertebrae.

Another enemy that often plagues women in menopause is cardiovascular disease. It starts with high blood pressure, elevated levels of triglycerides and cholesterol, and it can also be latent and manifest itself in atherosclerosis, the deterioration of blood vessels that can be fatal and cause a heart attack or stroke. Closely related to it is the fact that during this period women easily put on weight, and this happens in the worst possible way – by the deposition of visceral, deep fat in the waist area, around the vital organs and in the arteries. If care is not taken, one can easily become obese, which can result in metabolic syndrome and diabetes. Before entering menopause, women have two times lower risk of heart attack than men. After entering menopause, the risk becomes even. All this can be prevented with a moderate diet and regular exercise. During this period, doctors can recommend hormonal therapy, but problems in menopause can also be solved naturally.

When it comes to menopause, experiences passed down from generation to generation say that nature is the best ally of women’s health. Playing sports, walking in nature, socialising, taking care of one’s body weight, a balanced diet and keeping stress levels under control help every woman to get through this period of life with minimal discomfort. But there is also a number of plants that can lead to the reduction of hypersensitivity of the nervous system, nervousness, insomnia, hot flashes, heart palpitations and increased sweating: lemon balm, yarrow, marigold, valerian and mistletoe. They are all ingredients in an expertly made and completely natural preparation from the Herba Svet laboratory – Femisan B drops – in which these plants are used in the right and most useful proportion.

If the first symptoms of menopause come too early, and we are naturally keen to see oestrogen protecting us as long as possible, Femisan Gold is the answer. These easy-to-use capsules contain oestrogen herbs: chaste tree, black cohosh, hops and wild yam, as well as angelica and the famous adaptogen – ginseng. Synergy of these plants contributes to the hormonal balance as long as possible and protects the body, both from unpleasant symptoms and disorders that lurk in menopause. 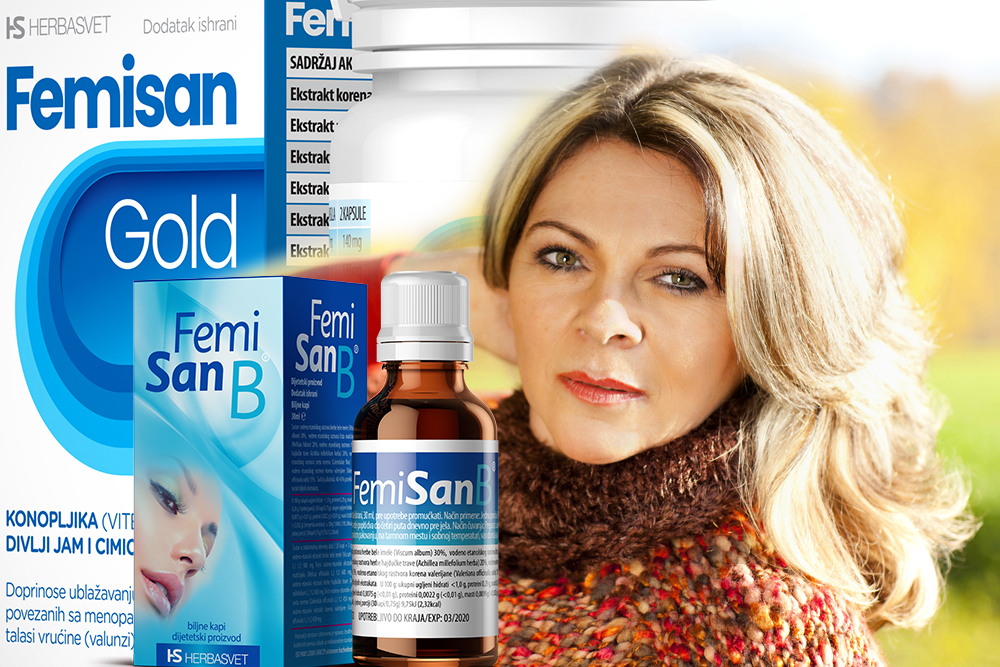