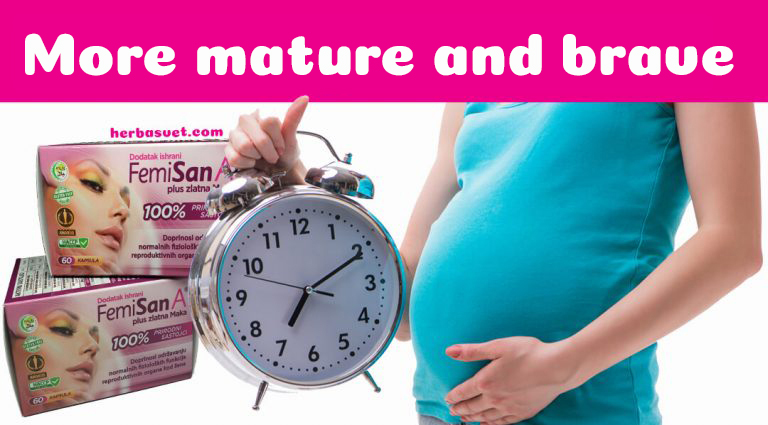 We already know that age is one of the most important factors for successful conception. With the biological clock ticking, the chances of pregnancy decrease as the number of healthy eggs drops, especially after the age of 36. Together with us, our egg cells also age, which not only makes it difficult to conceive, but also increases the risk of miscarriage. Even if we ignore the gynaecological side, chronic health problems begin to appear as we age; they generally worsen during pregnancy and can cause additional complications. Today, to make matters worse, we are increasingly exposed to various types of pollution that adversely affect the hormonal balance, and the lifestyle itself involving much sitting and little movement is not our side. But does pregnancy later in life have only disadvantages?

MOTHERHOOD AS A CHOICE

In the past, pregnancy was not a matter which attracted so much overthinking. Women did not have much of a choice. They were expected to get married, the sooner the better, and then nature would take its course. Even if they were a mathematical genius or a talented painter, that used to be ignored and trivialised, because that was not their primary function. The purpose of their talent was exclusively to attract a good opportunity for marriage, and their only role was to give birth and raise children – in poverty or wealth, in war or peace, with supportive or abusive husbands… Today, fortunately, women have a choice. Although emancipation is still ongoing as it takes time to completely change social norms, women can choose whether they will devote themselves only to their career, science, art, only to motherhood, or to a combination of any of these.

Most women today are keen to get an education, achieve career goals and be financially independent, so they prefer to postpone motherhood for safer times. Research conducted in Serbia a few years ago shows that more than half of first-born babies were born to women aged 20-29, while a third of women gave birth to their first baby in their thirties. Among first-time mothers, six percent were teenage girls and two percent women over 40.

RISKS IN PREGNANCY LATER IN LIFE

Whatever the reason for postponing pregnancy, the more time passes, the higher the risk. Women who become pregnant later in life run a higher risk of a risky pregnancy, a higher risk of miscarriage or premature birth. Complications in pregnancy after the age of 35 include gestational diabetes, high blood pressure – hypertension, placenta previa, pre-eclampsia and reduced chances of vaginal delivery, i.e. the need for caesarean section. For women after the age of 40, the chances of giving birth to a child with Down’s syndrome, as well as complications in the development of the foetus, increase. Therefore, the health of both the mother and future baby is at risk.

ADVANTAGES OF PREGNANCY LATER IN LIFE

However, the trend not only in our region but also in the whole of Europe is that the age of first-time mothers is on the increase. The average woman today gives birth to a child in her thirties, and more than half of women have only one child. It is interesting that in the past period, the fewest babies in Europe were born in Mediterranean countries, which are normally considered more patriarchal; most babies were born in France and Scandinavian countries, where fathers actively participate in raising children. This information clearly tells us what, as a society, we should look for in the future.

Research shows that, before embarking on motherhood nowadays, women are looking for a stable relationship, education, career and financial stability. Some surveys have determined that the highlighting of heightened risks inherent in pregnancy after the age of 40 only adds to the burden of worries for women, instead of helping them to resolve this dilemma. In addition, medicine has advanced enough to help women become pregnant for the first time at a later age, even when it was previously impossible – from egg cryopreservation, through artificial insemination, prenatal tests, screening tests, including the one for Down’s syndrome in the period between the 11th and 14th weeks of pregnancy, and keeping an eye on mother’s health and ensuring safe childbirth, or if any major complications do occur, ensuring a safe termination of pregnancy. 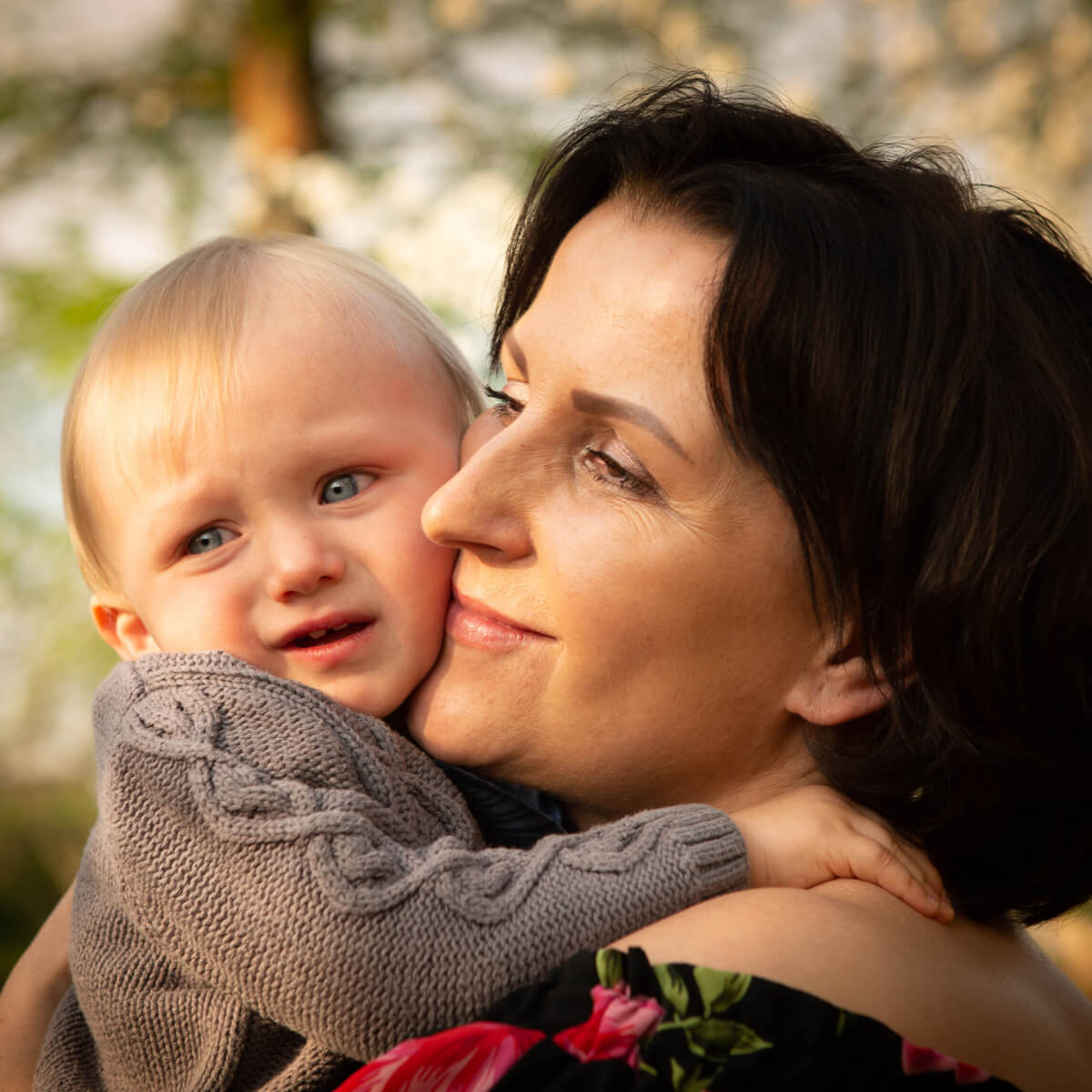 A young mother certainly has more predispositions for natural conception and a healthy pregnancy, as well as more energy for raising a child. But is it really that bad to bring a child into the world after the age of 36? On the contrary, motherhood at a mature age, after the age of 40, can bring a number of advantages:

So, although there are risks and conception does not come as easily as in the twenties, there is no doubt that pregnancy later in life and mature motherhood have their advantages. What life certainly teaches us is that we cannot always plan everything and that not everything is black and white. In fact, life is our ability to adapt to the challenges placed before us.

And when it comes to the challenge of conception, fortunately there are natural solutions: medicinal herbs that enable women to have a good hormonal balance, high-quality ovulation, a healthy endometrium to accept the fertilised egg cell and to enable the birth and development of a new life. For women, the best medicinal plants in their most useful form and in the best proportion are packed inside Femisan A: a completely natural preparation that helps women become mothers when they are ready.

In addition to Femisan A drops and capsules, there is Femisan Gold – capsules containing phytoestrogen plants that maintain female hormonal balance and a good level of oestrogen. They are intended for women in the later period of reproductive age, as well as for those who prematurely feel the first signs of the approaching menopause. With Femisan, maturity and courage, a modern woman faces no obstacles! 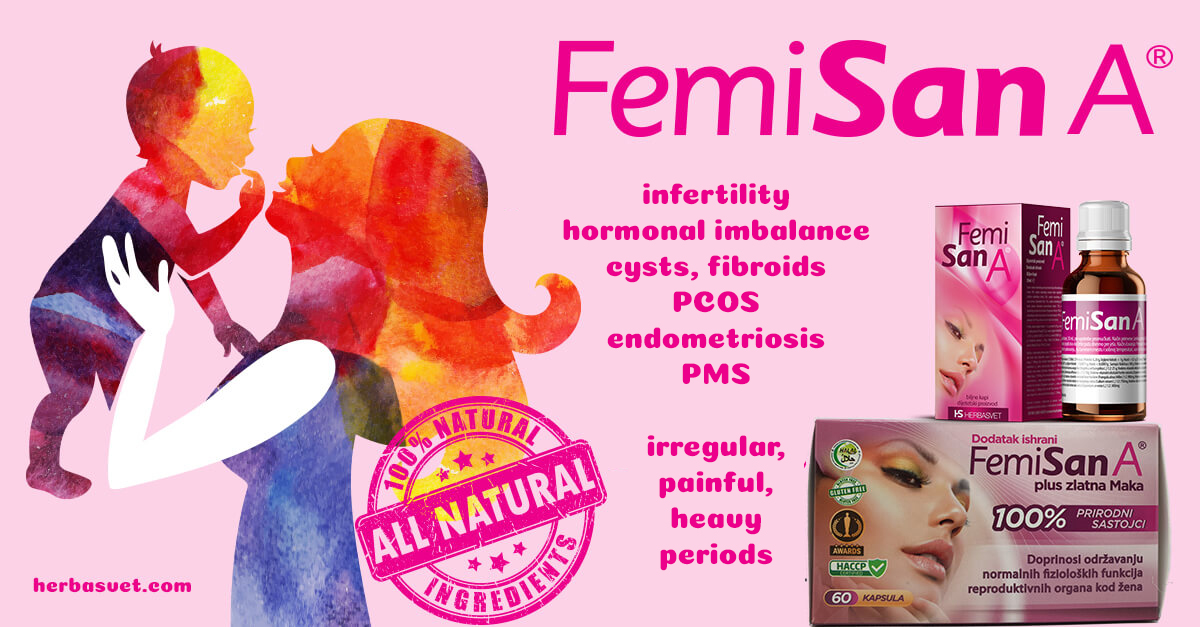