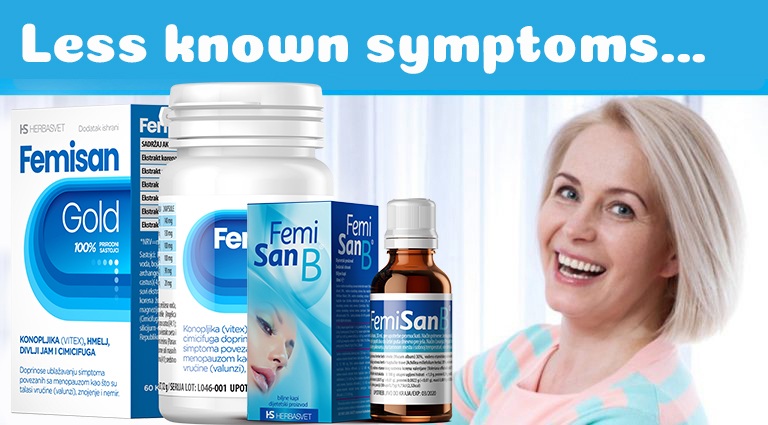 Oestrogen is a hormone that works wonders in our entire body, brain included. It is dominant during the follicular phase, the first phase of the menstrual cycle, and is most abundant before ovulation. When fertilisation of the egg cell does not occur, it recedes. That is when we feel our mood changing and our energy level dropping. At the age of 30, the ovaries begin to produce less oestrogen; after the age of 45 its decline is steep, until the final onset of menopause. This “nosedive” between the ages of around 45 and 55 is accompanied by a series of symptoms which can occur even if we have regular menstruation – during perimenopause, an “introduction” to menopause, which can last up to 10 years. Many women suffer some of the symptoms or become seriously concerned when one of them appears, without making a connection with the onset of menopause because they still have a regular cycle.

However, the textbook example of the first symptoms of menopause is that periods become shorter, are occasionally absent or the cycle itself becomes shorter. In mid-forties, changes in the cycle are already clearly noticeable, and by the age of 51 on average, the ovaries stop producing eggs and menstruation disappears. During the onset of menopause bleeding can sometimes be heavy, after a few months of not having a period at all. Officially, menopause is considered to have begun when 12 months pass after the last menstrual period.

But today, unfortunately, women enter menopause increasingly early, even before the age of 40. This can happen due to gynaecological surgical interventions such as hysterectomy, due to chemotherapy, Turner syndrome – a genetic anomaly, autoimmune diseases, long infections such as tuberculosis, malaria or mumps, as a result of enormous stress, or it is simply to do with genetics and runs in the family. Ovarian functions simply begin to shut down and the secretion of oestrogen stops. 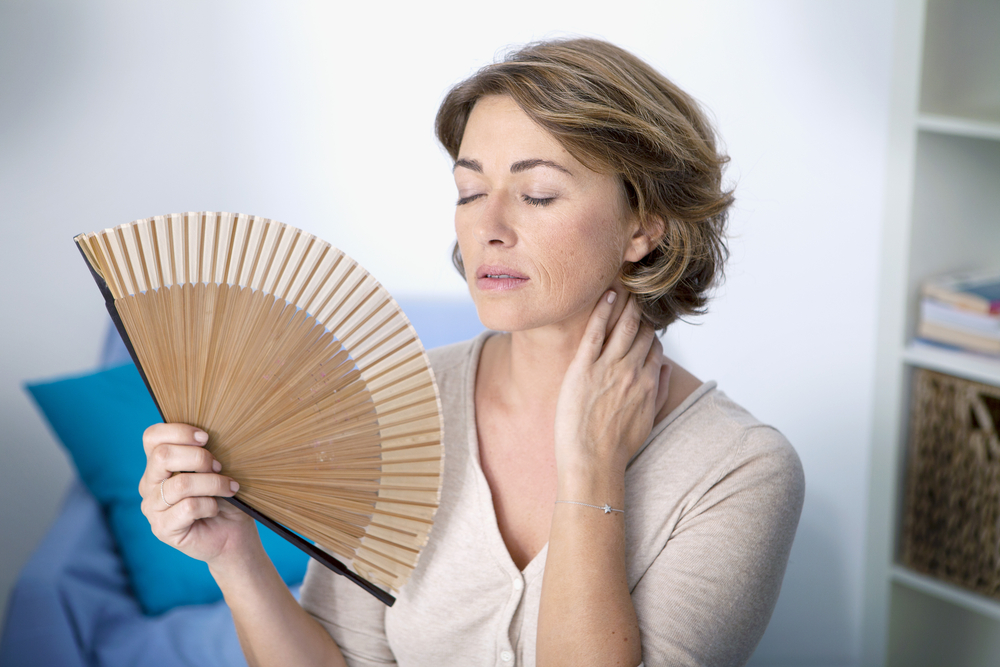 Regardless of whether menopause is normal or premature, the symptoms that are best known and most common are the same:

If menopause is bound to happen anyway, why should we worry if it comes prematurely? Early menopause is defined as premature ovarian failure before the age of 40. There are cases when it occurs even in girls, a few years after the first menstruation. It is characterised by amenorrhea (absence of menstruation), elevated gonadotropin levels and low oestrogen levels. Regardless of its cause, women who experience a drop in oestrogen at a younger age are at a significantly higher risk of a number of diseases, as well as premature death. Of course, the first and biggest consequence of the premature onset of menopause is infertility, which is very difficult for women who are keen to become mothers, but fail to do so.

There is a number of risks of developing diseases that affect a large percentage of women whose ovaries fail prematurely: 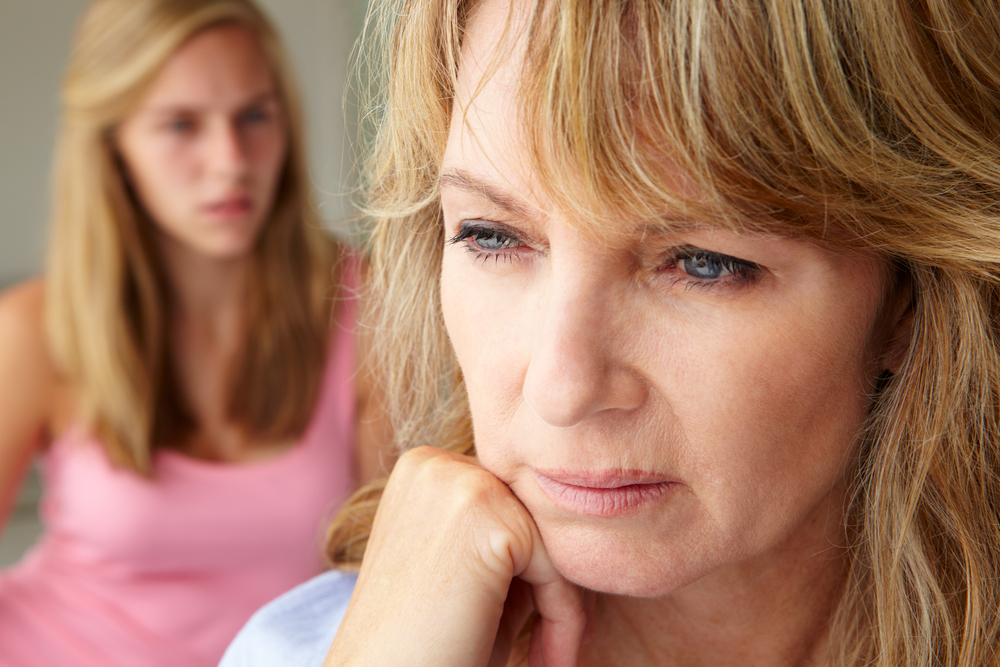 Of course, all women are susceptible to these risks, but the earlier menopause occurs, the greater the risk. We often do not even think about them, because we become preoccupied with the already mentioned unpleasant symptoms. But life is not an encyclopaedia and does not always work according to the rules. Every woman experiences menopause differently; in addition to the already mentioned common symptoms, there may also be those that are difficult to associate with menopause.

Even though menopause is a period that is expected and completely natural, women are mostly left to themselves and often do not know why they have some symptoms. Many believe that something is seriously wrong with them and begin to lose self-confidence. Family members are quite unlikely to show any understanding for their ills, while in their work and social circles their behaviour can be labelled as unkind and antisocial. That is why it is very important that women are properly informed. A woman’s ability to adapt to the new situation can greatly improve this period. In addition, regular examinations are necessary, and when the first symptoms of menopause appear, doctors will generally recommend the following hormone to be tested: oestrogen, progesterone, testosterone, FSH and LH. As thyroid hormones TSH, T3, T4 and fT4 are usually disturbed at the same time, they should also be added to the test list. Due to the already mentioned increased risks of osteoporosis, cardiovascular diseases and diabetes, it is important to do these tests annually, and to pay extra attention to one’s diet to avoid the deposition of visceral fat. Regular and moderate exercise is especially necessary in this period, even if it is just walking.

And finally, there is good news: although menopause has been proven to change a woman’s brain, including its structure, energy metabolism and connectivity, this change is temporary. Like any storm in life, once menopause is over it makes us stronger and wiser. The human body has the incredible ability to transform and adapt, and we just need to help it, mostly by practising a healthy lifestyle and being optimistic.

In addition to hormone therapy, which doctors may recommend at the onset of menopause, especially if it occurs too early, help can also be found in nature. A long time ago Herba Svet designed two preparations based on medicinal plants to help women: Femisan A (drops and capsules) is the best ally of women before menopause, and Femisan B (drops) during menopause. However, these two preparations can be combined in the transitional period. In this way, menstrual disorders and those of the reproductive system can be avoided and the unpleasant symptoms of menopause alleviated. Femisan B naturally calms, reduces hot flashes and helps us fall asleep. Femisan Gold also became available recently; it is a preparation based on phytoestrogens that helps us maintain the protective effect of oestrogen in a natural way and for as long as possible. 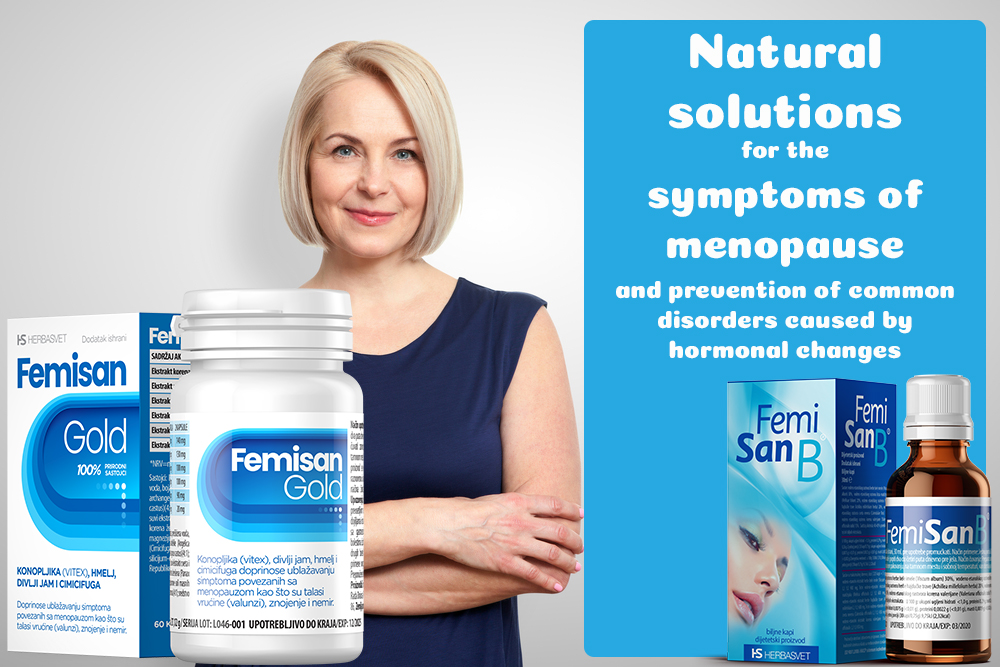