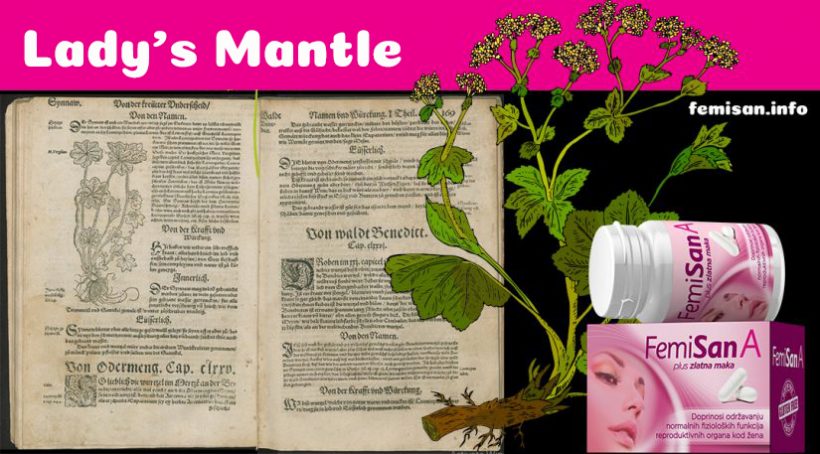 The first description of lady’s mantle dates back to 1539, when the German botanist and physician Hieronymus Bock, known also by his Latin name Tragus, kicked off the process of modernisation of medieval botany. Bock laid the foundations of modern science with his catalogue of 700 plants based on observation and detailed description. Kreutterbuch, literally translated as the “plant book”, first appeared unillustrated. In the following 1546 edition it contained excellent drawings by the artist David Kandel. This particular book later served as a basis for Carl Linnaeus’ bionomial nomenclature, the modern system of naming organisms. 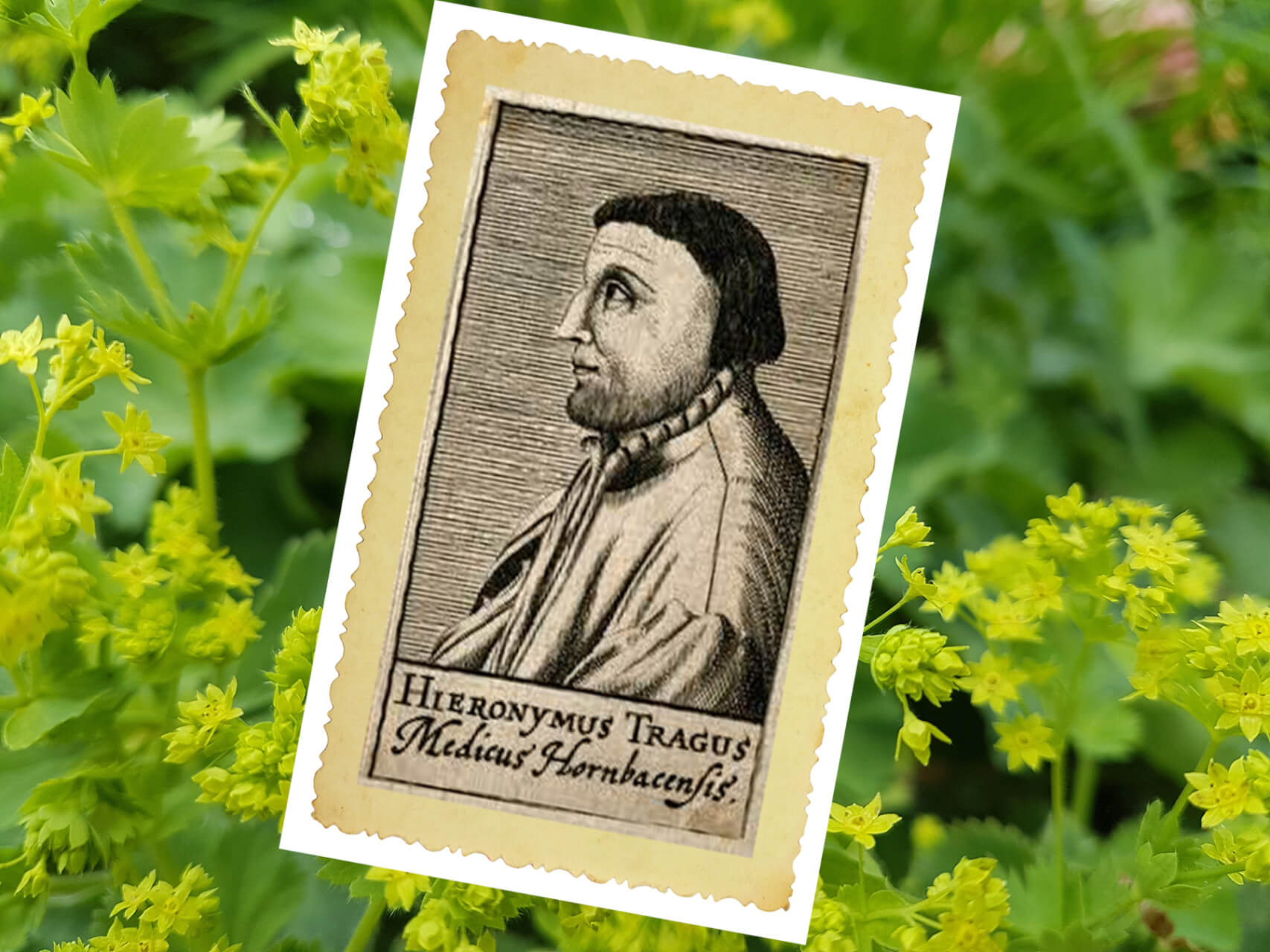 Bock knew well where each plant grew, which shows that he must have travelled a lot researching vegetation in the field. It is not an accident that a German scientist classified lady’s mantle in his book as a very important and useful plant; the plant was highly respected by the ancient German tribes and devoted to Frigg, the goddess of beauty and fertility.

Lady’s mantle was given its scientific name Alchemilla vulgaris thanks to alchemists’ belief that dew on its leaves could lead them to philosopher’s stone which has the ability to transform base metals into gold. Lady’s mantle is a pretty plant on whose leaves one can see droplets shining like little pearls throughout the day. Probably it was its beauty that first attracted our ancestors who soon realised that lady’s mantle’s biggest value were its medicinal properties. Women were particularly convinced of that. 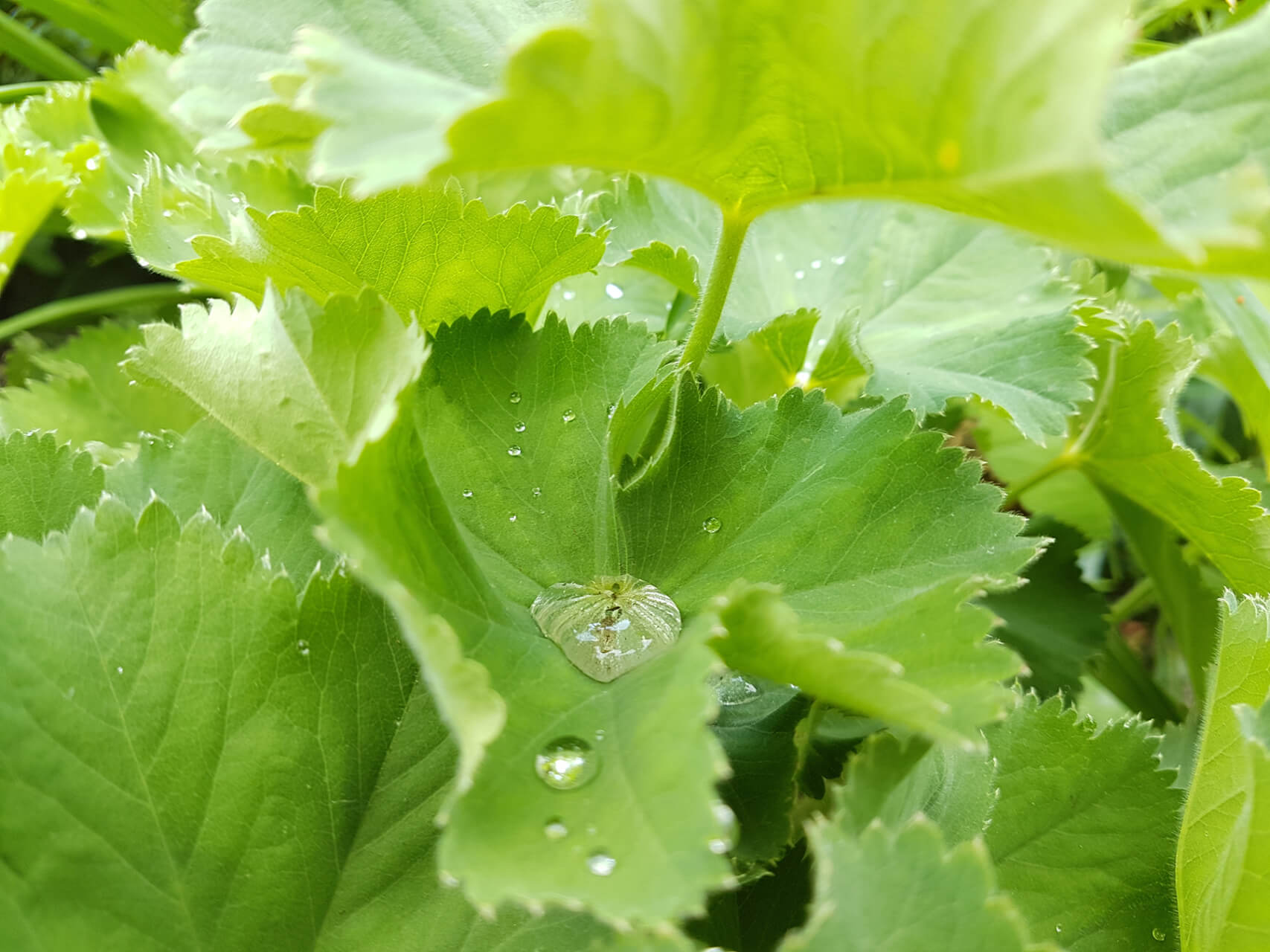 Lady’s mantle can be found all over our hilly Balkan peninsula and has been used in folk medicine since time immemorial. Apart from helping with stomach upsets and diarrhoea, it helps to heal wounds and calm skin infections. It is most useful to women. Its precious ingredients – tannins, bitter glycosides, flavonoids, phytosterols, salicylic acid, saponins, ethereal oil – have anti-inflammatory, anti-bacterial and anti-fungal properties. 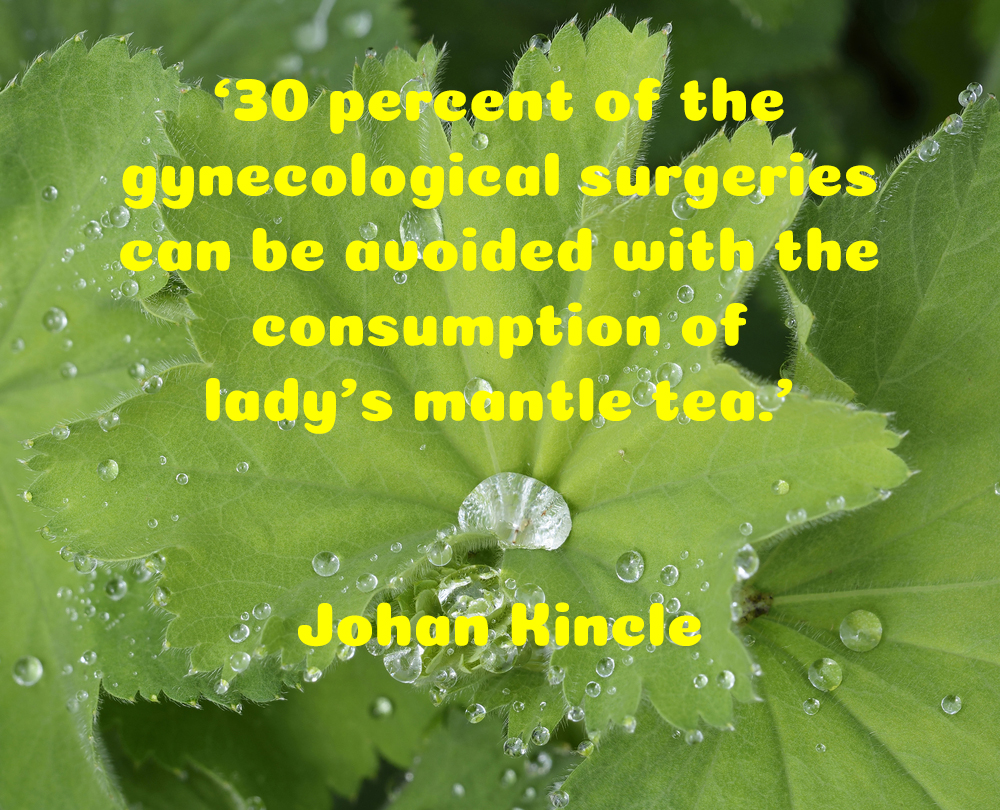 This natural hormone balancer helps with irregular or heavy periods, cysts, polycystic ovaries, uterine fibroids, endometriosis, but is also known to ease labour pain, speed up wound healing and recovery after childbirth. Tannins and astringents prevent increased bleeding and lessen period pains. With its anti-fungal properties it can help fight fungus and bacterial vaginitis; thanks to its power to prevent bacterial growth, some experience shows that it helps even to fight staphylococcus. Research has shown that lady’s mantle is useful in treating conditions caused by the human papillomavirus and that its ingredient agrimoniin prevents breast cancer.

A legend has it that women used to believe that dew droplets from lady’s mantle leaves can help them remain forever young. But the ritual was not simple: at midnight, only on the nights when the Moon is full, fully naked, they would have to dip their small toe in the dew on lady’s mantle. Today we know that we do not have to be naked and wait for midnight, but lady’s mantle can certainly help us remain young for longer: in addition to using its leaves to treat skin conditions, it is excellent in reducing wrinkles and age spots. But the biggest aesthetic benefit is that lady’s mantle can enable us to maintain a good hormonal balance and thus remove the unwanted symptoms of such imbalance: obesity, acne, greasy skin, increased hairiness. And when the menopause time comes it can reduce its symptoms too. 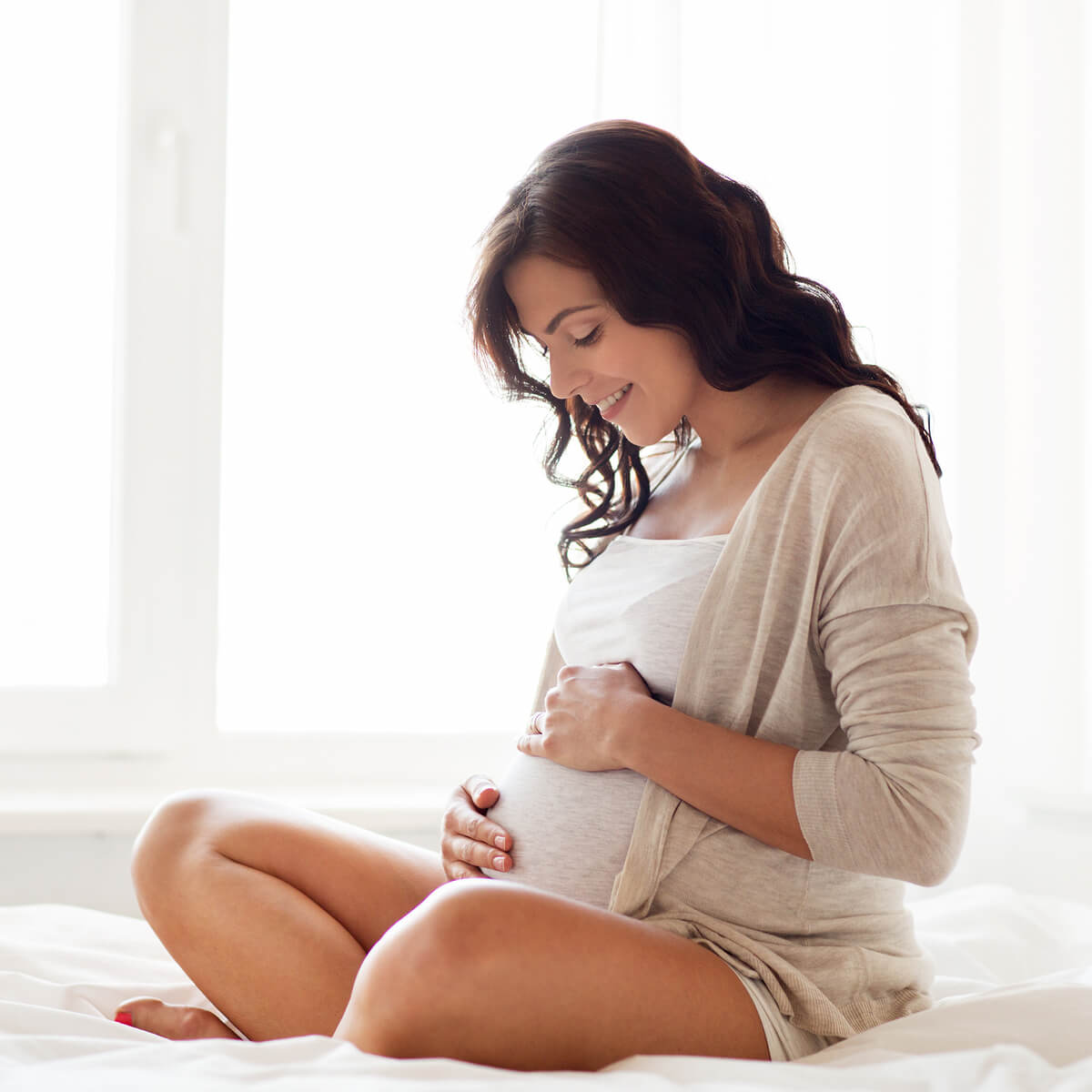 Youthfulness and the future generations can be helped by lady’s mantle: this plant, in addition to its other beneficial properties, helps women with sterility issues. It is not by accident that lady’s mantle was devoted to Frigg, the goddess of fertility, and later in the Middle Ages, to Virgin Mary, our Lady, whose mantle or protector it was. Once upon a time women used to pick lady’s mantle and kept it in vases at home to increase femininity and attract love. Today we know that lady’s mantle increases the growth of progesterone, normalises the levels of hormones, strengthens the endometrium – the uterine lining, stimulates the ovaries and ovulation, and thus not only increases fertility but also ensures that pregnancy is free from complications and does not result in a miscarriage.

Lady’s mantle can be used on its own, but it is best used in combination with other herbs, such as yarrow, marigold, herb robert, shepherd’s purse and parsley. Nowadays we do not have to go in search of these herbs because they can already be found in their clearest and most usable form and perfect proportions in the completely natural preparation in our pharmacies. Femisan A, “cloaked in lady’s mantle” has been a woman’s best friend for two decades. 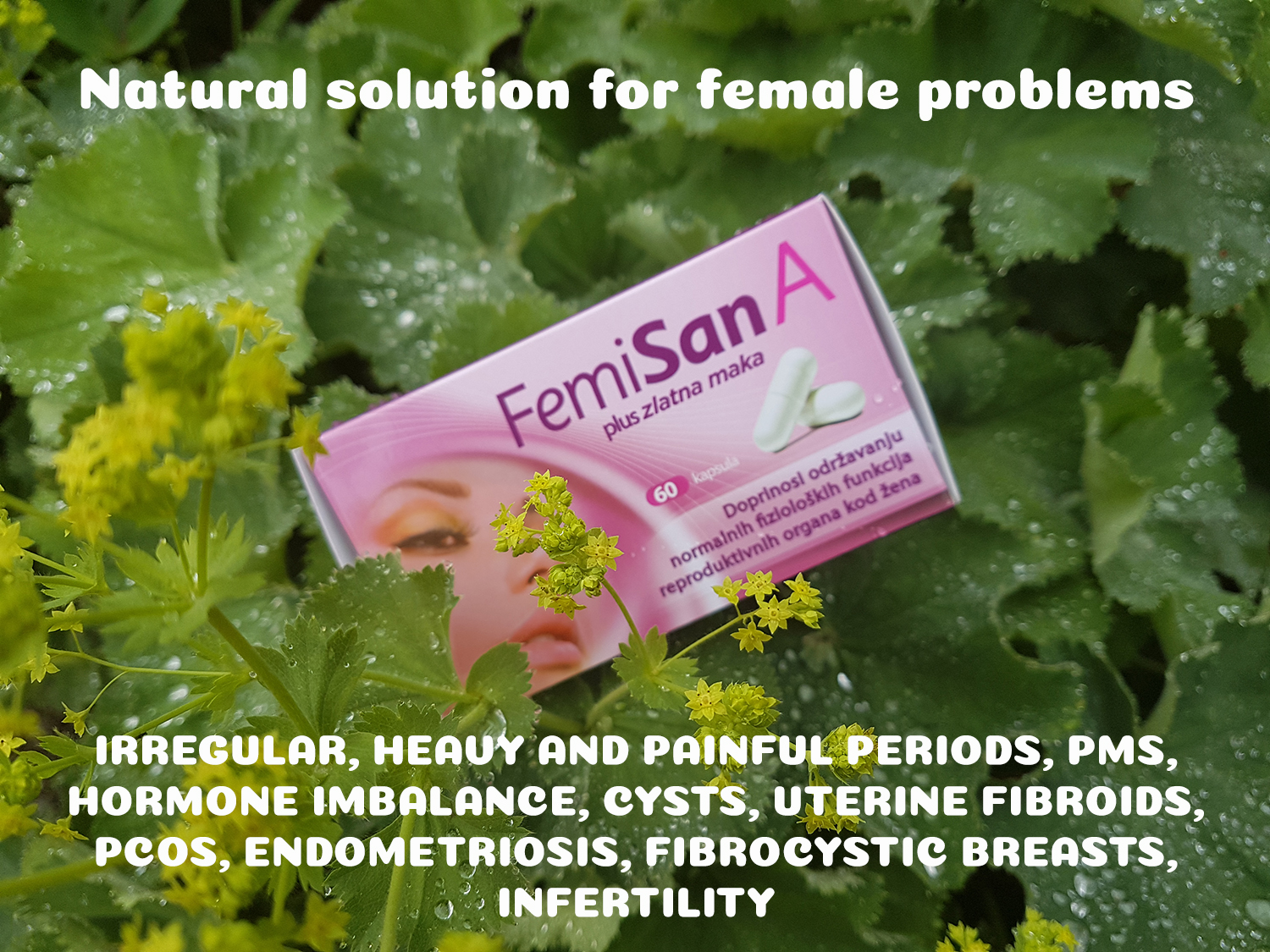